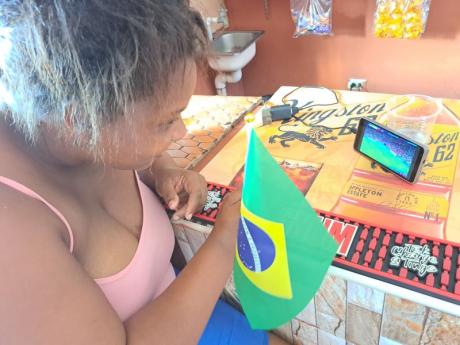 "Yes, dem a big side and dem affi win," Monica Jones a supporter said as she watched the match from a phone screen. - Rasbert Turner photo

Several sections of Spanish Town, St Catherine, were transformed into zones of total abandonment as Brazil started their World Cup with a two-nil victory over Serbia.

"Woie! woie! Brazil nah let wi down again. Yes, dem a big side and dem affi win," Monica Jones a supporter said as she watched the match from a phone screen.

She was one of many in the Old Capital who exhibited their loyalty to the South American giants, who have won the competition five times.

At Charmz Curry Pot, along Jobs Lane, patrons were totally engaged in the competition.

As many cheered the victory, it was clear that there is an undying love for the team nicknamed Seleção Canarinho.

Many said that the former champions are in form and will bring happiness and victory to supporters.