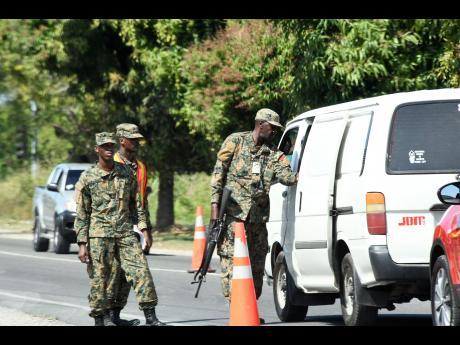 The groups argue that the data demonstrate that SOEs can help to save lives. - File photo

Fifteen private sector groups are urging the parliamentary Opposition to support extension of the states of emergency (SOEs) until January 14.

The Senate will meet to consider the matter on Friday, following approval of the resolution in the House of Representatives on Tuesday.

However, it will require an affirmative vote by at least one Opposition senator for the extension to be approved.

Opposition Leader Mark Golding has stated that his side still has major concerns about extending the SOEs.

However, the broad-based private sector grouping is suggesting the Opposition support the extension with the condition that the Government addresses outstanding key issues, critical in achieving full Opposition support.

The groups argue that the data demonstrate that SOEs can help to save lives.

"Since the declaration of the SOEs on November 15, we have seen murders decline significantly nationally, and in the parishes where the SOEs were declared nine days ago," they say.

The groups further note that since Wednesday, within the parishes and specific zones where SOEs were declared murders have recorded a dip from 21 for the period November 7-14 to 6 from November 15-22.

The groups say they agree with the Opposition that SOEs should not be a routine measure in normal times but argue that the trend in recent months suggests that additional measures are now needed to disrupt  criminal networks and reduce violent crimes and murder.

"Jamaica is bleeding, and we are at a point of great frustration as citizens. We expect our Prime Minister to lead this process and engage the Opposition with humility and inclusiveness. We are hopeful that the Opposition will reciprocate," they say.

The groups have also urged the Government to work with the Opposition to quickly bring the Enhanced Security Measures Act to Parliament.

The groups supporting the appeal:

The Jamaica Chamber of Commerce (JCC)

The Negril Chamber of Commerce

The Westmoreland Chamber of Commerce

The May Pen Chamber of Commerce