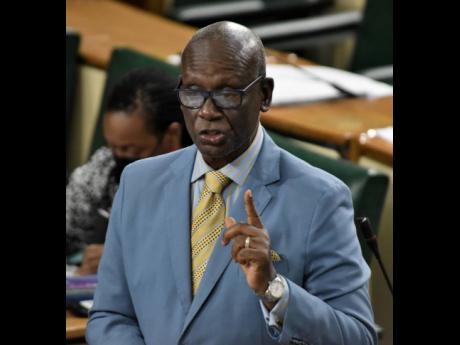 LOCAL GOVERNMENT Minister Desmond McKenzie has issued a warning that his ministry will be dealing harshly with employees of infirmaries who abuse or take advantage of the residents under their care, and that there will be no tolerance for abusers of homeless people.

The tough-talking McKenzie made the declaration on Wednesday during his keynote address at the St James Infirmary in Montego Bay, where ground was broken for the construction of a new kitchen and dining area, as well as the opening of a therapeutic park for the residents. The ground-breaking ceremony was done as part of activities in celebration of Local Government and Community Month.

“Every infirmary in Jamaica since 2016 has benefited from significant investment by the Government of Prime Minister Andrew Holness. But truth be told, the investments that we have made are under threat because some of the persons who work within these facilities continue to prey upon the residents, continue to ‘tek weh’, continue to treat some of the residents with little or no regard,” said McKenzie.

“If it is the mayor of Montego Bay who gives you a job in the infirmary, or any political person, regardless of who give you that job, once you are found violating the rights of the residents in our facilities, you no longer have a job in these facilities and no union,” he said.

“We have seen cases where residents have been assaulted and they broke their hands; or residents dropped out of their beds and died on the floor of the infirmaries, and nobody saw that happen until the following morning when everybody wake up,” McKenzie added.

As far back as 1980, there have been reports of abuse at infirmaries across the country, with elderly and vulnerable residents allegedly being beaten or neglected by staff members and their belongings stolen.

The Eventide Home at Slipe Pen Road in Kingston, which was destroyed by a fire that killed 153 residents in May 1980, was at the centre of ghastly abuse reports where some residents were neglected to the point that rodents reportedly fed on their body parts.

In more recent years, the Portland Municipal Corporation ordered a probe into reports of abuse and intimidation at that parish’s infirmary in 2009, while similar reports surfaced in 2011 about the Kingston-based Golden Age Home where residents were allegedly sprayed with water hoses each morning and then forced to walk back to their dorms stark naked.

On the subject of homeless people, McKenzie gave an update into the promise of a reward for information into the death of Lionel Johnson, a homeless man who died after being set on fire in Kingston on August 29 this year. Five teenagers were subsequently charged in October in relation to that incident.

“I got a message before I left office yesterday (Tuesday) that the police at the Central Station (downtown Kingston) has indicated that they are in the process of sending me a letter and the report on persons who provided information that led to the arrest and charge of those persons who burned to death that homeless man in the Corporate Area a couple of months ago. We offered a reward of $500,000, and we are going to live up to that commitment once the police have provided the information,” said McKenzie.

“We are not going to tolerate any abuse of persons living on our streets, because for a lot of them, it is not of their own doing,” he added. “Some of them have family problems, where their family put them out, and some of them leave ‘country’ and come to town to find employment, but cannot get through, or they find woman or man who trick them out and they end up on the road.”