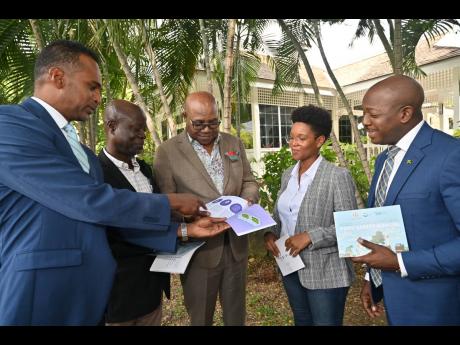 Tourism Minister Edmund Bartlett has announced that between January and October of this year, farmers sold just under $125 million of produce through the tourism Agri-Linkages Exchange (ALEX) online platform.

The minister made this announcement on Wednesday during the launch of the Agricultural Suppliers Food Safety Manual at Devon House in Kingston.

“The Agri-Linkages Exchange project continues to be beneficial to the 1,200 farmers and 247 buyers who are registered on the platform, and the ALEX Centre continues to engage both farmers and hotels online, facilitated by a team of six agri-brokers,” said Minister Bartlett.

“I am happy to report that between January and October of this year, just under $125 million of produce was sold through the Website,” he added.

ALEX, which is a joint initiative of the Ministry of Tourism, through the Tourism Enhancement Fund, and the Rural Agricultural Development Authority (RADA), is the first online platform of its kind in the country. It brings hoteliers into direct contact with the farmers and, in turn, reduces leakages and helps Jamaica retain more of the economic benefits of tourism.

The platform, which can be found at www.agrilinkages.gov.jm, allows farmers to plan to adequately address seasonality in crops and provide information as it relates to the geographic location of specific crops. Registration is also facilitated on the portal.

Bartlett also shared that the TEF has been enhancing strawberry farming through its Berry Farming Programme. He noted that 15 farmers are currently producing strawberries through funding from the Tourism Enhancement Fund (TEF), and eight of them currently consistently supply the tourism sector.

These farmers sell between 30 and 40 per cent of the strawberries they produce directly to the travel and hospitality industries. In contrast to the past, when all strawberries served in our hotels and restaurants had to be imported, this signifies a source of income for the growers and a savings in foreign exchange for the nation.

“Just to give you an idea of the revenue streams open to strawberry farmers, on average, farmers with one strawberry house currently sell strawberries at $800 per pound to locals and $1,200 per pound to retailers, and they are selling 30 pounds of berries per week and earning spin-off income from selling over 200 strawberry suckers per month at $100 per sucker,” said Bartlett.

The Minster also noted that “farmers with three or more strawberry houses” report that they are currently selling strawberries at $1,000 per pound farm gate to hotels, purveyors, and supermarkets. They reap an average of 1,600 pounds per month, which brings them a revenue of $1,600,000. Their annual revenue amounts to $11,200,000 for the next six to seven months, with approximately $2,794,000 going into operating expenses.

The Agricultural Suppliers Food Safety Manual that was launched by the TEF sets out procedures that adhere to international standards and was developed in collaboration with the Ministry of Agriculture and Fisheries, the Bureau of Standards Jamaica, RADA, the Jamaica Manufacturers and Exporters Association, tourism stakeholders, and the Ministry of Health and Wellness.

With the input and full backing of these organisations, it is expected that the manual will serve as an information resource for farmers, agri-processors, and manufacturers who supply the tourism sector.