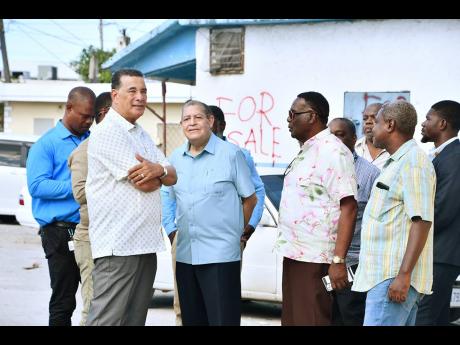 Montego Bay is to get a new, modern transportation centre to help ease the congestion on the streets and provide a more comfortable space for commuters to travel seamlessly.

The disclosure was made by Transport Minister Audley Shaw, who, along with Homer Davis, minister of state in the Office of the Prime Minister – West; Heroy Clarke, member of parliament for St James Central; and Montego Bay Mayor Leeroy Williams, toured the existing Montego Bay Transportation Centre, the neighbouring People’s Arcade, and lands owned by the Jamaica Railway Corporation along Railway Lane in the city.

“In partnership with the [St James] Municipal Corporation, we are going to build out a new transport centre which will be twice the size of where we are now,” Shaw said during the tour on Thursday.

The current transportation centre, which is located on Barnett Street, is owned by the St James Municipal Corporation, but its operations are being handled by private operators under a long-term lease.

“It will be a good start and I want to see it up and running early in the new [year, 2023]. I don’t want it dragged out,” Shaw said of the proposed facility to be constructed close to the existing transport hub.

While not disclosing the potential cost for the project, the transport minister promised that, wherever the funds are to be found, it will be done.

“We don’t have that yet. It’s going to be a partnership. I will see what I can contribute from the ministry, the municipality will make a contribution, and other agencies of government. We are going to find the money to build a nice transport centre,” he said in a matter-of-fact way when quizzed.

Noting reports about inadequate restrooms at the current transport centre, Shaw said the new centre, which will be constructed on three acres of land on Railway Lane, close to where the previous Montego Bay train station was, will have adequate bathroom facilities.

Mayor Williams, who is also the chairman of the St James Municipal Corporation, said the local authority is serious about the development of the area and will be putting things in place to facilitate the project so that it can get off the ground and be completed early in the next fiscal year.

The mayor noted that the town centre was often congested with traffic and that the new transport hub should help to ease some of those concerns.

“We want to build a modern transportation centre. As a matter of fact, this is part of our strategic development plan … and the Railway [Lane] lands is where we see that we could possibly do that,” Williams said.