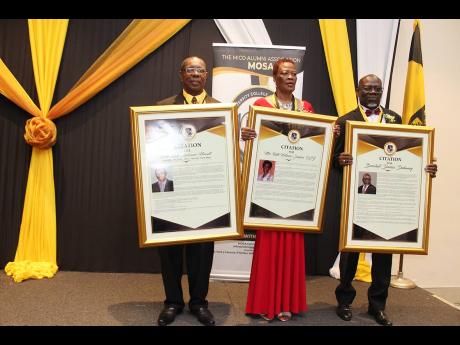 Contributed
From left: Ray Howell, Ruth Williams-Simpson and Burchell Duhaney, recipients of the 2022 MOSA gold medals during the MOSA Gold Medal Banquet inside The Jamaica Pegasus hotel on Saturday, November 19.

The Gold Medal Award is the highest honour that may be bestowed upon a past student, and this year’s recipients are Ruth Williams-Simpson, Burchell Duhaney and Ray Howell, whose citations were read by Alvin Lawson, Dorrett Campbell, and Merrit Henry, immediate past president of MOSA, respectively.

After leaving The Mico, Williams-Simpson taught at the secondary and tertiary levels in Jamaica. She worked in the areas of curriculum delivery (lecturing), curriculum development and evaluation, before becoming an educational administrator with the Ministry of Education. There she was involved in the revision of the science and physical education curricula for schools.

The three-time Olympian, Pan-American bronze medallist (4x400m), Central American and Commonwealth Games athlete, and Central America and Caribbean Games medallist (200m and 4x400m) evolved into a track and field, and netball coach, and was “actively involved in the life of MOSA, New York chapter, with diligence and enthusiasm, and served with distinction in various capacities, attaining the highest position of president”. In New York, she was also manager of the Northeast Bronx Day Care Centre, an elementary-school teacher, and “lead teacher to facilitate the transformation of schools under review”.

“Ruth Williams-Simpson … you are the epitome of excellence and much deserving of recognition and awards for your public service and volunteer work. Your career track seems to identify two distinct paths, teaching and sports; you excelled at both … MOSA is indebted to you for the ways you have represented us and your alma mater, for your altruism, the way you have served your spiritual community, and the parent and nurturer you have been,” her citation read.She was also recognised for her fundraising acumen which has benefited the Renford Shirley Scholarship, the Mico University College, and a COVID -19 relief fund.

Upon graduation from The Mico, Ray Howell returned to Grateful Hill Primary School, which he attended. He then moved on as principal of Drews Avenue Primary and Edith Dalton James Secondary schools. He served as Jamaica Teachers’ Association president (1992 -1993) and was chairman of various committees and trusts.

He has either been at the helm of, was a member of, or associated with many national and professional organisations, such as TIP Friendly Society, the JTA Co-operative Credit Union, National Housing Trust, the Jamaica Confederation of Trade Unions, the Public Broadcasting Commission of Jamaica, the National Council on Education, the Association of Principals and Vice-Principals, and the Social Development Commission.

As such, Howell has been the recipient of several national and professional awards, including the Badge of Honour for Meritorious Service for Commendable and Invaluable Service to Education; Jamaica 50 Prime Minister’s Medal of Appreciation for Service to the Nation in the field of education; and the JTA’s 25th , 40th and 50th anniversary awards.

“For Ray Alphonso Howell, leadership and learning are as natural as breathing. This symbiotic relationship emerged at The Mico, where he served as public relations officer, Rodgers House, and president of The Mico 4-H Club … . You are the quintessential Miconian. You have travelled in the service lane and have served your country well. MOSA salutes you for having done it with your might … .” Paulette Chin read.

Burchell Duhaney, whose“remarkable life has been characterised” by his“exemplary contributions to social transformation and national development”,was called “an impenitent patriot” and “an institution within an institution”. He returned to Westmoreland, after studying at The Mico, where he became a secondary-school teacher and community leader. Back at Mico, he was lecturer in the visual arts department in 1978, head of that said department in 1980, head of Faculty of Humanities and Liberal Arts in 1986, and vice-principal in 1993.

In 2004, he was appointed principal of the Edna Manley College of the Visual and Performing Arts, where he spearheaded the establishment of the School of Arts Management and Humanities, and launched the Edna Manley Foundation. He was also the longest-serving president of MOSA, registrar at the International University of the Caribbean, member of the board of directors of the Mico Foundation, and the foundation’s secretary manager.

“The Mico Alumni Association/The Mico University College cite you, Burchell Darius Duhaney, people-centric educator with a high level of credibility, and professionalism … and is pleased to present you with its prestigious Gold Medal Award for your work, your worth, your will, your tenacity of purpose and resilient spirit, shrouded by your quiet dignity, measured narratives, and calm, confident, yet, humble demeanour,”Campbell read with much gusto.

In his reply on behalf of the other recipients, Howell said, among other things, that be believed he was uttering the thoughts of his fellow awardees in saying that to receive the Gold Medal Award in MOSA’s 100th anniversary “makes it extra special and an awesome lifetime experience”. He thanked God for enabling them to use their “time, talent and treasure to improve, inspire and influence life positively, resulting in their being recognised with the highest honour bestowed by this institution”.

“The three of us are humbled for the recognition given to us … . We are extremely grateful and feel privileged to join that great band of illustrious Miconians who have been so honoured in previous years,” Howell said.