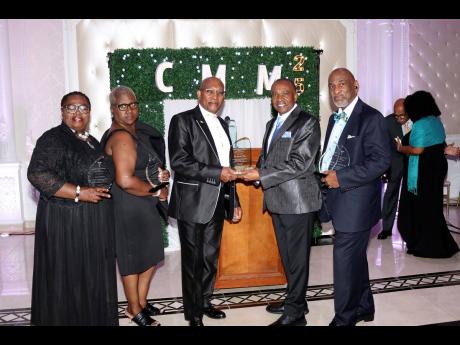 The New Jersey-based Caribbean Medical Mission (CMM) marked its 25th anniversary with a fundraising gala that honoured its founding members, even as it received commendation for its sustained contribution to communities in Jamaica and other areas across the region.

President of CMM, Dr. Winston Scott, said, “Since 1996 our mission has continued to grow and impact the needs of the underserved throughout the Caribbean, Africa and right here in New Jersey.” He said the decision to start the mission arose out of a meeting with former prime minister, Portia Simpson Miller, who impressed upon them the need to mount a health mission to Jamaica.

“As we celebrate our 25th anniversary we honour those who were the founding members and the early stewards of the organisation,” Dr. Scott said.

“We are proud to honour Dr. Omar Bey... whose clinical skills and stellar career as a pulmonologist both in the hospital and in the community serve has been an inspiration to many.

In addition, he said, “Our community service award goes to one of our own, Joyce Lynch, who tirelessly continues to contribute to multiple medical missions each year. We have stayed true to our commitments and have continued our support to the Jamaican and Dominican cancer society, as well as provide medical equipment to our adopted clinic in Portland, Jamaica. We also expanded our community services locally in New Jersey through collaborations with St Michael Medical Center and Carewell Health, in addition to the provision of health and education fairs on men and women’s wellness, as well as cancer awareness,” Dr. Scott said.

Jamaica’s ambassador to the United States, Audrey Marks, noted the significance of the group’s expanded outreach.

She observed that “the Caribbean Medical Mission was founded 24 years ago by a group of physicians from Jamaica with the stated purpose of doing volunteer medical missions to Jamaica. However, over the years, this mission has evolved to include the African diaspora in the Americas, and, as such, your creed, ‘Help the needy’, entails providing services to other islands in the West Indies, countries in Central and South America and beyond.

She said that “over the past 25 years, CMM has provided medical care to just over 22,000 patients in Jamaica with a monetary value of US$1.4 million. An additional 20,000 patients are seen in other Caribbean countries with a monetary value of US$1.3 million. I am also aware that the CMM provides accessible health care to communities in need in the United States, as well as other parts of the world,” she noted.

“Jamaica is proud of the partnership we have forged and looks forward to another 25 years of helping the needy,” Ambassador Marks declared.

She said, “The drive by the CMM to provide medical care to the needy in the Caribbean and New Jersey over the past 25 years is a contribution which serves as a lifeline to the health sector in Jamaica. The government and people of Jamaica consider the CMM as a true friend of Jamaica and a valued partner in our developmental journey.”