#FootballFever | ‘Normal thing to do’: Japanese fans tidy up at World Cup 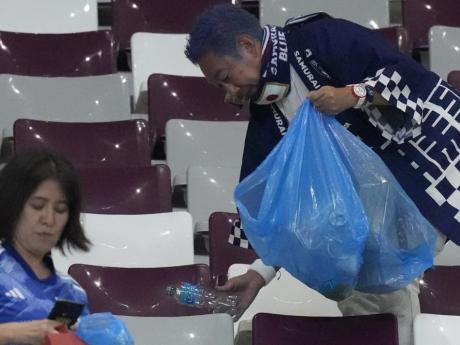 DOHA, Qatar (AP) — The sight of Japanese fans at a World Cup bagging trash after a match, win or lose, always surprises non-Japanese.

Japanese players are famous for doing the same in their team dressing room: hanging up towels, cleaning the floor, and even leaving a thank-you note.

The behaviour is driving social media posts at the World Cup in Qatar, but it's nothing unusual for Japanese fans or players.

They are simply doing what most people in Japan do at home, at school, at work, or on streets from Tokyo to Osaka, Shizuoka to Sapporo.

“For Japanese people, this is just the normal thing to do,” Japan coach Hajime Moriyasu said. “When you leave, you have to leave a place cleaner than it was before. That's the education we have been taught. That's the basic culture we have. For us, it's nothing special.”

A spokeswoman for the Japanese Football Association said it's supplying 8,000 trash bags to help fans pick up after matches with 'thank you' messages on the outside written in Arabic, Japanese, and English.

Barbara Holthus, a sociologist who has spent the last decade in Japan, said cleaning up after oneself is ingrained in Japanese culture.

“You're always supposed to take your trash home in Japan, because there are no trash cans on the street,” said Holthus, the deputy director of the German Institute for Japanese Studies. “You clean your classroom. From a very young age you learn you are responsible for the cleanliness of your own space.”