JCF numbers to be bolstered ahead of Christmas 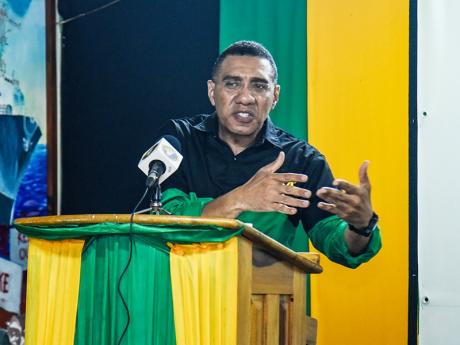 He stressed the need for an increase in the number of persons in the police force, especially to handle cases of murder. - Nicholas Nunes photo

Three hundred new members are to be added to the Jamaica Constabulary Force (JCF) in a few days, as the Government continues its efforts to combat criminals across the island.

Prime Minister Andrew Holness made this announcement at a Jamaica Labour Party (JLP) Central Executive Meeting held at the party's headquarters on Belmont Road in St Andrew on Sunday.

"We have been increasing our resources, in terms of the number of policemen. A few months ago, we graduated 300 and couple days time, we will graduate another 300. That's 600 policemen will be added to the force in a few months," Holness announced.

"We will, by the year is out, add over 1,200 [policemen and women], but even that would not be sufficient to tackle the number of murders per week....The new policemen would not yet have all the skills to be pressed into full operations, but even where they have been pressed into operation, we're having an impact," he said.

Holness said this new batch of cops will help with ensuring the safety of Jamaicans during the upcoming Christmas season.

"Coming into the Christmas season, seeing that there is going to be this increase, your police forces, your security forces, and I use that term deliberately, because they're not from another country, they're right here in Jamaica knowing what is happening. They see the problems that you see and they want you to be safe as well," Holness said.

He stressed the need for an increase in the number of persons in the police force, especially to handle cases of murder.

"I don't think the public fully understands [what happens] when a murder takes place. [They think] the police just come, pick up the body, throw it in the back of a jeep and throw the body on a slab at a morgue and that's the end of it and that's the perception people have in their minds.

"When a murder takes place, there is a whole rendition of departments of the police force, whose resources get tied up in doing the scene of crime, policemen have to do a significant debrief in terms of writing statements, collecting evidence. Then there is the trauma, the trauma is not just for the residents who witnessed this murder [but also] the police [who] have to go on the scene too," he explained.