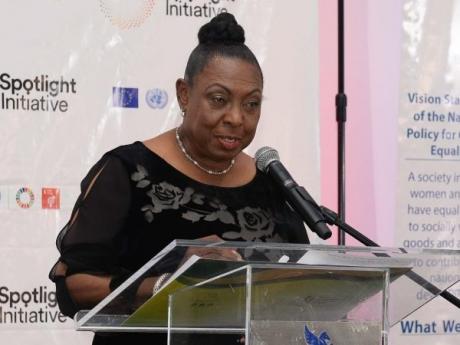 She was speaking during an International Day for the Elimination of Violence Against Women (IDEVAW) event at the Spanish Court Hotel in New Kingston, on Friday. - JIS photo

Several pieces of legislation are being amended to provide greater protection for victims of gender-based violence.

Work to this end has commenced on the Domestic Violence Act, to broaden the scope and definition of 'domestic violence', and the Memorandum of Objects and Reason relating to the draft Firearms Prohibition, Restriction and Regulation Act, 2022, to ensure compliance.

This was disclosed by Minister of Culture, Gender, Entertainment and Sport, Olivia Grange.

“The drafting instructions have now been issued to the Chief Parliamentary Counsel and… [are] being worked on. So the amendments to the Domestic Violence Act will, very soon, be brought to Parliament; and the scope will be brought to provide greater protection for anyone who experiences domestic violence,” Grange said.

She was speaking during an International Day for the Elimination of Violence Against Women (IDEVAW) event at the Spanish Court Hotel in New Kingston, on Friday.

Additionally, the Government is conducting a comprehensive review of the National Policy for Gender Equality, with support from the Caribbean Development Bank.

“This is being done under a project which was implemented by the Jamaica Social Investment Fund under the Basic Needs Trust Fund,” Grange informed.

This year's commemoration of IDEVAW will feature 16 days of activism against gender-based violence, from November 25 to December 10.

The period is observed by individuals and groups globally, to collectively lobby for the elimination of all forms of violence against women and girls.

This is done locally through several engagements, including public education sessions and a range of other information-sharing activities, to heighten awareness on issues relating to gender-based violence across Jamaica.

IDEVAW 2022 is being observed under the theme - 'Gender-Based Violence is Everybody's Business: End GBV'.