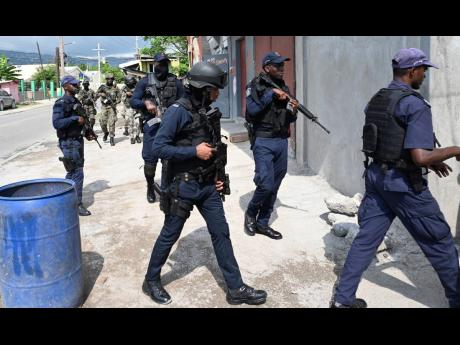 File
It is a fact that the presence of the security forces makes a difference in halting the activities of the criminals and law breakers.

Crime and violence in Jamaica has become the permanent object on people’s minds locally and in the diaspora. This subject is threatening the social, political, and economic growth of the country. Although we are citizens of this country, many of us admit that this crisis is stifling the delightful culture, freedom, and enjoyment experienced in Jamaica, land we love dearly.

Many policies, strategies, methods, and plans have been formulated and applied, but the monster of crime continues to escalate and threaten the normal lives of people within the society. The security forces are trying their best with the limited resources as the citizens live in fear in the country.

The viable solutions are the implementation and execution of strict laws, sophisticated surveillance, mobile police units (recommended by a retired administrator of the Jamaica Constabulary Force), and proactive citizen action.

The approach needs to be implemented immediately and decisively. It is a call for a quick and effective application of the strategies that worked in the past along with the viable solutions mentioned above.

It is a fact that the presence of the security forces makes a difference in halting the activities of the criminals and law breakers. Once a homicide or crime is committed, the members of the security forces should move with speed to catch the criminals, and when caught, have them processed speedily and then have them processed through the court system rapidly. The new law forbidding the possession and use of illegal guns must be executed with speed and accuracy so that perpetrators can see that breaking the law will not be tolerated.

Although resources are limited, the Government must agree and deploy immediate resources to enhance the surveillance system, which can bring immediate success. Cameras should be placed strategically in every central location in districts, major towns, villages, and cities across Jamaica. This investment will give vital information that will allow the security forces and governing law makers to detect and solve crimes and catch the law breakers.

The gGovernment should approve the urgent recruitment of young men and women to the Jamaica Constabulary Force and the Jamaica Defence Force. There should be the recruitment of no fewer than 2,000 new members. These new members would be part of the mobile police units that will make up the Police Mobile Department. The aim is to have these units in every district, village, and major towns. They would contribute to police presence on the ground in these locations at all times. The police mobile units would operate 24 hours consistently. This type of radical approach will result in interruption of activities by criminals throughout the night and day.

This strategy would intercept and catch criminals who roam at nights and should impact significantly the murder rate and commission of violent crimes. The Government should give the support to facilitate this thrust to be in full operation within one month.

This new approach will send a strong message to the murderers, scammers, extortionists, rapists, robbers, and other law breakers. The mobile police units would be able to implement a rapid-response system, along with other formulated strategies, making this an effective method of crime reduction.

Signs and billboards should be installed in central locations in districts, towns, villages, and cities denouncing criminal activities and murderous actions. Young people should be recruited to form teams to drive around neighbourhoods to pronounce rejection of crimes, violence, and shootings.

This heightened public awareness would bring to the forefront the dangers of criminal activities and send a signal that the Government is ensuring the safety of all citizens.

The Government should lead out in the implementation of these solutions and seek support from the Opposition and private sector to work together to stamp out crime and violence so that Jamaica can be the ideal place to live, work, visit, raise families, and do business.