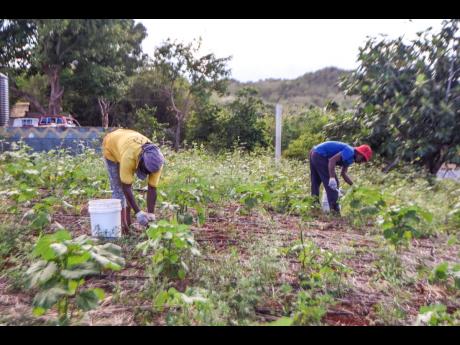 File
In this April 2022 photo farmers are seen working in their fields in Comma Pen, St Elizabeth.

The Ministry of Finance has approved a ceiling budget of $4.3 billion during the 2023-24 financial year for Essex Valley Agriculture Development Project’s (EVADP) land irrigation development for Comma Pen, St Elizabeth.

Petronia Colley, project manager for EVADP, disclosed last Thursday during a community consultation meeting held at the Comma Pen Church of God to provide an update into the progress of the project, which is valued at £35 million.

“In our last project meeting, we indicated that based on available financing for the project, we would need the Government of Jamaica to be able to allocate the funds and commit to providing the funds to implement this infrastructure. The government is making strides in terms of getting to the point of giving us the budget to move along,” said Colley.

“I am happy to report that the Ministry of Finance and the Public Service has provided the ceiling for that $4.3-billion to execute activities in the net financial year,” Colley added.

She also gave updates on other aspects of EVADP’s progress, to include the procurement and laying of water-pipes for provision of the commodity to farmers.

“Under the project’s Component Three, which will look specifically at the renewal energy system, Cabinet has approved the award of contract to the recommended bidder, and that contract we are seeking to have inked by the first week of January 2024,” Colley said.

Her update follows a previous community engagement meeting held in April this year, to educate farmers about the project.

The project is being funded by the United Kingdom Caribbean Infrastructure Fund through the Caribbean Development Bank and is slated to benefit more than 700 farmers operating on 810 hectares of land in the Essex Valley region, through an irrigation system that will deliver 1,700 cubic metres per hour of water. It was originally scheduled for completion in December 2023, but that timeline had to be pushed back due to the COVID-19 pandemic and the Russia-Ukraine conflict.

Lawrence Morgan, a farmer living in the Comma Pen community, welcomed the project update while noting that farmers often have to spend a lot of money to buy trucked water for their crops.

“This community has suffered over the years for water. We as farmers have to buy water, and water is very expensive, as sometimes I have to spend up to $200,000 to buy water based on the amount of crops that I have,” said Morgan. “Sometimes I cannot perform the way I want to perform because it is rough to buy water, and one load cannot serve for one week.”

Franklin Witter, minister of state in the Ministry of Agriculture and Fisheries, said the progress of the project will be closely monitored.

“We had some hitches earlier on between 2020 and 2022, but now we are moving ahead and therefore we expect to have a start-up before the end of this year. The people of this community are very happy to see the progress we have made in the last six months or so in making sure that the project becomes a reality. I will be working assiduously to make sure we meet the timeline going forward,” said Witter, who is also the member of parliament for St Elizabeth South Eastern where Comma Pen is located.