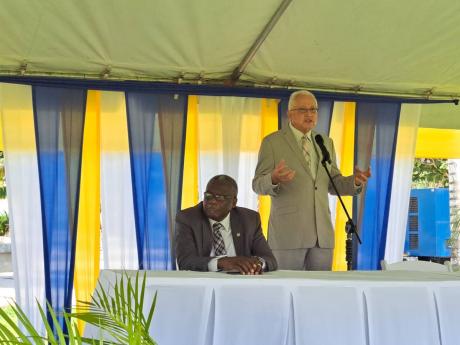 JUSTICE MINISTER Delroy Chuck is urging Jamaicans to make greater use of the 20 restorative justice centres across the island to settle their disputes, instead of resorting to violence that results in backlogs in the court system.

Addressing Friday’s staging of the Legal Aid Council’s Justice Fair at the Harmony Beach Park in Montego Bay, St James, Chuck lamented that residents involved in interpersonal conflicts are not using the justice centres, which are equipped to handle matters related to child diversion and restorative justice as well as dispute resolution, as often as they should to resolve their problems.

“We have 20 justice centres across Jamaica, and they are underutilised. We have funding provided by the Minister of Finance (for the centres), but the funding is underutilised. While we have conflicts, violence, and abuse across Jamaica, we have the opportunity to invite persons to come to the restorative justice centres and see if these conflicts can be resolved in a peaceful and amicable way; and we know it is possible,” said Chuck.

“As we go across Jamaica, we are urging neighbours, communities, and families to get people who are involved in tribal warfare, neighbourly warfare, or family and personal warfare to really come to the restorative justice centres and see how best you can resolve your matters peacefully. There is no reason for there to be so much violence and so many matters being dealt with by abuse and threats, because restorative justice can heal,” Chuck stressed.

The minister also pointed out that the promotion of restorative justice as an avenue for conflict resolution will be carried out across Jamaica, including in schools and churches.

“One of the challenges that the Ministry of Justice has is that not enough people are using restorative justice. It is justice that heals, but people do not know about it, first; and second, where they know about it, they do not know how effective it has been to settle conflicts,” Chuck explained.

In September, the leaders of 13 umbrella groups of churches, representing 3,000 religious congregations across Jamaica, signed a memorandum of understanding to train church members and leaders in restorative justice practices.

At that time, the Ministry of Justice reported that more than 7,000 conflicts have been referred for settlement through restorative justice over the past four years.