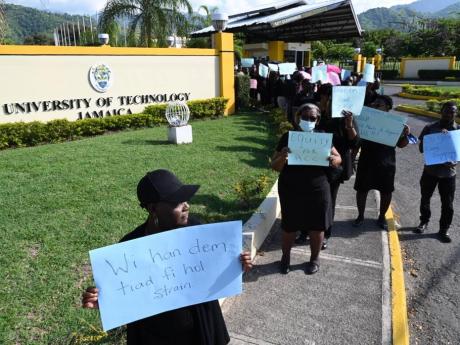 The upset UTech workers are demanding action from the authorities. Rudolph Brown photo.

The administrative staff at the University of Technology, Jamaica (UTech) took strike action on Monday to protest what they describe as the lackadaisical approach of the institution to conclude a salary review that has been outstanding for more than five years.

President of the University of Technology Administrative Staff Association (UTASA), Jeanette Grayson, told The Gleaner no item on a 2017-2019 review for administrative staff at the university has been actioned.

And she said despite numerous meetings up to September of this year, no conclusion has been reached with the university.

This, she said, has led to much frustration among the over 400 administration staff.

"We are a training institution and we must practise what we preach."

She said this is especially concerning given the recent compensation review in the public sector.

Grayson said UTASA has been unable to get any definitive position from UTech's administration as to where members of the administrative staff would fall within the new compensation structure.

And she said the association has been unsuccessful in its efforts to have a meeting with the Ministry of Finance.

She said the strike by workers is the first in a series of actions that they will take until the new review package is signed and items actioned.

"We are expecting that by the end of the fiscal year, that all of our items on our claims will be addressed favourably," she said.