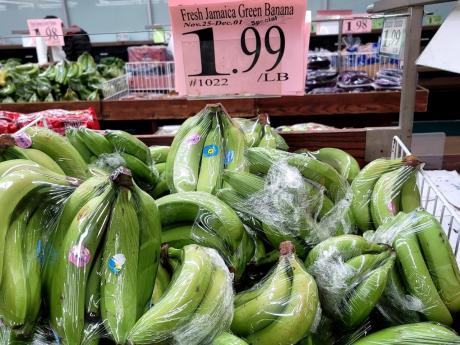 JP Farms is encouraging consumers to be vigilant, and store owners are encouraged to take action. - Contributed photo.

JP Farms, Jamaica's largest commercial grower of bananas, says it has moved to swiftly take legal action against fraudsters in Canada who have misrepresented its brand.

It notes that widespread reports of the fake bananas have triggered concerns among several members of the diaspora community in Toronto.

Early investigations also point to the fake “Jamaican Bananas” originating from another Caribbean island, according to JP Farms.

“The imposter bananas show quality defects that would not have passed JP Farms' standards for export - these include sunburn damage and the food being too old to be used as boiling bananas - meaning the fruit would be tough when prepared,” said Figueroa in s a statement today.

Figueroa added, “Our customers have come to know and trust JP bananas and we are disappointed that this trust is being exploited - for this reason, we have consulted with our legal team to take swift action to protect our customers, our hard-working farm team here in Jamaica and our brand.”

JP Farms Commercial Manager Neleta White noted that the company has a strong presence in the Canadian market and that it exports bi-weekly to distributors that primarily serve the Caribbean diaspora.

She further noted that JP Farms' Canadian distributor partners have indicated that customers are already refusing to purchase the fruit due to the poor quality.

The distributors have also expressed concerns about the potential negative impact on the Jamaica-grown banana market in Canada, according to White.

JP Farms is encouraging consumers to be vigilant, and store owners are encouraged to take action.

“While we pursue legal action, we strongly encourage Canadian stores selling the imposter bananas to pull the fraudulent product from their shelves and cease all sales of these bananas with immediate effect,” Figueroa stated.

Supporting the point, White affirmed, “our farming operations are based in Jamaica, but we maintain a strong line of sight in all of our markets both locally and internationally and would discourage anyone thinking of taking this deceptive route for a quick sale as we will not hesitate to pursue legal action.”