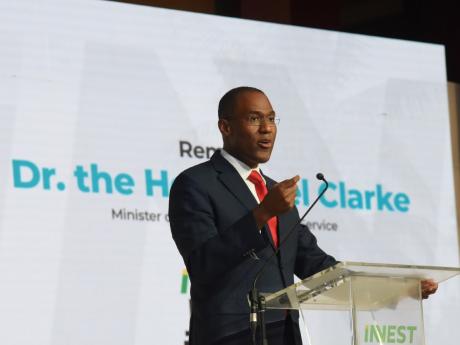 Finance Minister Dr Nigel Clarke says legislative amendments are soon to be made to allow Jamaica to bring in billions of United States dollars in potential investments.

This will be made possible through changes to the Income Tax Relief (Large-scale Projects and Pioneer Industries) Act of 2014.

Clarke made the announcement while speaking during today's opening session of the Invest Jamaica 2022 Business Conference, held at the Montego Bay Convention Centre in Rose Hall, St James.

The two-day conference is being held under the theme 'Jamaica – The Nearshore Delivery Hub of the Caribbean.'

“We will be, hopefully by the end of this fiscal year, tabling in Parliament the amendments to the Large-scale Project and Pioneer Act to make it operational. This is an Act that aims to attract investments of US$1 billion or more to Jamaica,” said Clarke.

While not going into details about the amendments, Clarke said that those who want to put forward US$1 billion in investment will be afforded certain benefits under the Act.

The Income Tax Relief Act was originally introduced to provide income tax relief in relation to projects and activities so designated and for connected matters.

It was also intended to replace tax holidays with tax credits.

Last year, the Government committed to pursuing amendments to the Income Tax Relief Act during this legislative year, to create a more supportive environment for business and investment.

Amendments were also to be made to the Urban Renewal (Tax Relief) Act; the Financial Administration and Audit Act; and the Financial Services Commission Act.

However, of the four legislative measures, only the Urban Renewal (Tax Relief) Act was passed by Parliament.