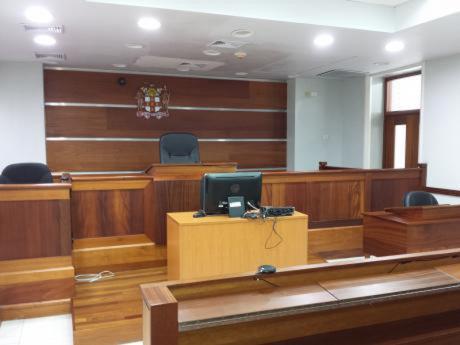 The vicious killer murdered the victim, who he had earlier chopped in his head, because he did not want to pay him the money for fracturing his skull.

A man who shot and stabbed his drinking partner to death in St Mary in 2017 to avoid paying him $200,000 for a head injury was this morning sentenced to life in prison.

The 36-year-old convict Bastene Gillespie will have to serve 27 years in prison before becoming eligible for parole.

The vicious killer murdered the victim, who he had earlier chopped in his head, because he did not want to pay him the money for fracturing his skull.

Interestingly, Gillespie had chopped the man in his head over a dispute over $20 in 2016.

Theodore James, 26, otherwise called 'Theo', of Bagnold Spring in the parish, was murdered a day before he was to attend a mediation session with Gillespie.

The St Mary shoemaker and father of four at the time was charged with wounding with intent in connection with the chopping incident with James and was before the parish court.

Gillespie pleaded guilty to the offences in the St Mary Circuit Court in July.

According to the facts in the case, James left home for work on the morning of the incident and did not return to his premises that night.

Some time later that night, his mother, Hortense Barrett Gordon, heard several gunshots nearby and the following morning discovered that it was her son who was killed.

James' body was found along a riverbank with multiple stab wounds to the neck, chest and shoulder areas.

A gunshot wound was also observed on his body.

According to one of the two Crown witnesses, who had accompanied Gillespie on the day of the murder, Gillespie had threatened to kill James even though he continued to support Gillespie's shop after the chopping incident and would often sit and drink rum with him.

Dwayne Mills said he was present one day at Gillespie's shop when James came to make a purchase and after James left Gillespie said, "You know say da bwoy ya fi dead."

The witness said although he encouraged him to "lowe out dat" he would repeatedly remark "Time a di master, a just time do tings."

According to the other witness, Patrick Hylton, on the day of the incident, Gillespie waited for James, chased him, and shot him as he begged for his life.

The witness said James, while being chased, fell into a gully.

He further stated that following the incident Gillespie ran to where he was and handed him the gun and went back in the direction where James' voice was heard.

He said Gillespie, who remained there for only five minutes, on his return said, "mission accomplished."

The two witnesses were also charged with misprision of felony and were previously sentenced after they pleaded guilty under a plea deal.

Misprision of felony is a crime that occurs when someone knows a felony has been committed but fails to inform the authorities.

In the meantime, Assistant Director of Public Prosecutions Syleen Ogilvie, who prosecuted the matter with Crown Counsel Vanessa Campbell, lauded the police investigator, Detective Corporal Levan Lyle of the Port Maria Police Station, who she said did a stellar investigation into the matter.