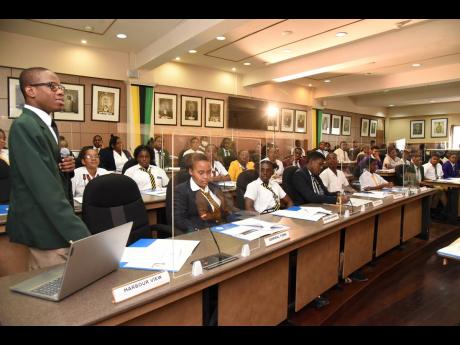 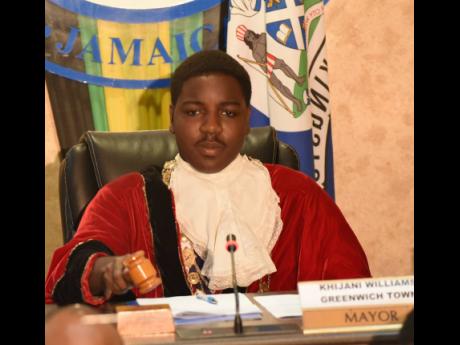 Ian Allen/Photographer
Khijani Williams, who represented the Greenwich Town division, was the mayor presiding over the Junior Council session.
1
2

The junior council of the Kingston and St Andrew Municipal Corporation (KSAMC) has given overwhelming support for the establishment of cadet units in all schools to combat student violence.

Friday’s unanimous vote at the first sitting of the council in two years put the spotlight on one of the concerns that have emerged during the coronavirus pandemic: antisocial behaviour and physical violence.

The motion, which was put forward by Zachary Walker, junior councillor for the Harbour View division, called for the forging of a strategic partnership with the Jamaica Combined Cadet Force and the Jamaica Defence Force to install cadet units in the Corporate Area.

Citing statistics that 60 per cent of high-school students have witnessed violence in their school, and a further 80 per cent have seen violence in their community, Walker argued that cadet units offered ideal, structured programmes to help students become disciplined leaders.

“To some persons, cadets will be tough. However, the point of it is to instil discipline in our youths, teach them self-control and anger management,” he said.

The motion was seconded by junior councillor of the Duhaney Park division, Najhae Walters.

More than 30 students from technical, junior, and traditional high schools across Kingston and St Andrew took part in the Junior Council Forum, which was held as part of the series of activities for Local Government and Community Month.

Trafalgar division Junior Councillor Aliyah Rhooms advocated for the Government to establish a transportation system for students within the municipality.

Pointing out that frequent strikes by transport operators often leave many students stranded, the Immaculate Conception High student argued that a transportation system solely for students is long overdue.

She called for the Ministry of Education to partner with the Ministry of Transport for the donation of 12 buses for schools within the municipality, to take students to and from major towns centres in the morning and evenings.

“Students of secondary schools in Kingston and St Andrew who commute to and from school on secondary transport depend on a system that reeks with unreliability, insufficiency, and exposes them to a host of dangers,” she said.

Her motion was seconded by junior councillor of the Hughenden division, Katrina Chin.

These were two of five motions put forward by the junior councillors. The others were to implement drug awareness programmes in schools, the relaunch of the EduLink Ja website, and a call to establish remedial programmes for students with disabilities.

Meanwhile, Kingston Mayor Delroy Williams, who sat in the proceedings, commended the junior councillors for their advocacy and for showing interest in local government.