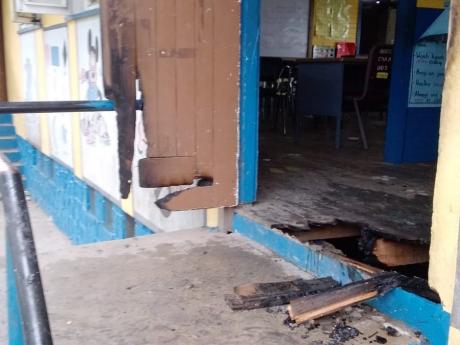 A fire-damaged door to a classroom at Carron Hall Primary School in St Mary. - Contributed photo.

An appeal is being made for persons with information on the fire that damaged a classroom at Carron Hall Primary School in St Mary to come forward.

The incident, which occurred last week, saw a door and a section of the board floor of the grade one classroom being damaged.

This has forced the school to move classes in that room to another location.

Member of Parliament for Western St Mary, Robert Montague, says it is important that the perpetrators are caught.

"Vandals have now made two attempts to burn down this vital institution in our community. We are appealing to anyone who may have seen, heard or knows anything. We need all information to find these wutliss, dutty criminals," Montague declared in a statement.

"We have had to remove grade one from where it used to be, we're using the isolation room," principal Brenton Pinnock told The Gleaner on Wednesday.

Carron Hall primary has a student population of 104.

Following the fire, Ministry of Education personnel subsequently visited the school to assess the damage.

The MP reminded that last August criminals stole the solar panels and inverter that powers the water pump in the community.

A man was subsequently arrested.