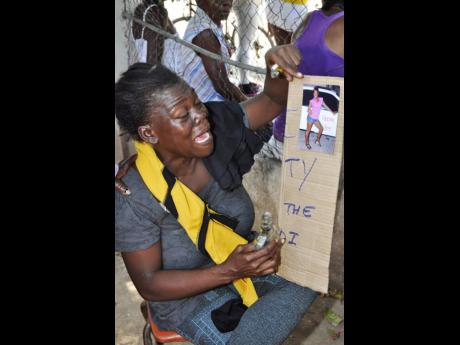 File
Forty-year-old Veronica Nelson, mother of 16-year-old Vanessa Kirkland, who was killed in a police shooting on Norman Road, Kingston 13.

The appeal involving the three constables who were found guilty for the 2012 shooting death of 16-year-old schoolgirl Vanessa Kirkland has been adjourned to April 17 next year.

Constables Andrewain Smith, Durvin Hayles, and Anna-Kay Bailey, who were convicted of manslaughter and sentenced to 14 years and six months’ imprisonment in February 2019, are appealing their sentence and conviction.

The matter started in the Court of Appeal on Monday but was adjourned Tuesday after state prosecutors requested additional time.

All three appellants had their $2.5-million bail extended.

The defence lawyers have not officially started their arguments.

The three law enforcers, who were assigned to Mobile Reserve, were arrested and charged with murder and wounding with intent following a ruling from the director of public prosecutions.

The Immaculate Conception High School student was shot and killed on March 20 on Norman Lane, Kingston 13, about 9 p.m.

The prosecutor led evidence during the trial that the constables drove on to Norman Lane in Kingston on the night in question and fired on a blue Suzuki Swift motorcar that was parked along the road.

Kirkland and six other occupants who were inside the car were shot and injured, but the teenager subsequently died.

Lawyers who represented the policemen had argued that the defendants were acting in self-defence when they discharged their weapons.

They maintained that they were searching for the vehicle after they were alerted that occupants of the car had robbed a man of his cell phone. The cops said they were fired on by two men inside the car.

Among the grounds are that the sentence was manifestly excessive.

During the trial, the lawyers had recommended that they each be sentenced to between one and five years.