10,000 Men and Their Family Movement expands to Portmore 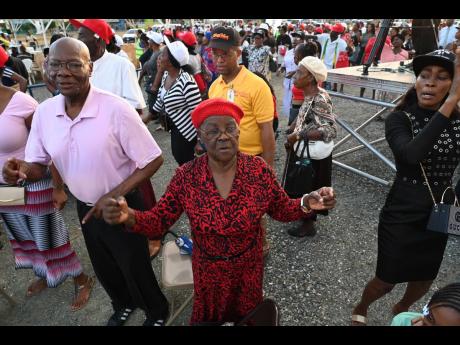 Rudolph Brown/Photographer
Residents of Portmore gather at the Climate Change Park for the 10,000 Men and Their Family Movement event, which was staged Sunday in association with five ministers’ fraternal from St Catherine.

The 10,000 Men and Their Family Movement which started in Spanish Town, St Catherine, has expanded its reach to include the municipality of Portmore.

Scores of residents turned out at the Portmore Climate Change Park in St Catherine Sunday for a night of praise and worship and prayers against crime and violence.

The occasion followed the spectacle of marching bands and uniformed groups with messages of peace on parade. Residents who converged at the venue expressed satisfaction that churches were challenging working in tandem against criminals, who are threatening the potential of the Sunshine City.

“I think the municipality has been tarnished by murders, robberies, and rape, so it is pleasing that the campaign against crime finally arrived,” Lionel Murphy, a resident, said.

“We need more numbers here, but I think that it will grow as active collaboration forms a social response to crime and violence,” Waterford resident, Monifa Johnson, said.

“Sad to say, there was a time when criminals respected the elderly, women and children. That is now history, so the gruesome acts must be dealt with earnestly,” Johnson said.

She also called for more churches to get on board and be active agents.

For Lisa Stanley, the Church’s effort must be commended as its voice continues to be a clarion for peace.

“While we respect the involvement of all in the fight against crime, this gathering here shows that there is potential for growth and we welcome the inclusion,” Stanley said.

She was among those who turned out at the Climate Change Park in Portmore to hear members of the Church pray for peace.

Chairman of the 10,000 Men and Family, Bishop Rowan Edwards, said the churches are resolute against murders and other crimes.

“We are very pleased to be here today. It is the commencement of us going islandwide. We start here and our next stop is Old Harbour,” he said.

“I personally believe that the states of emergency (SOEs) were working and should have continued, with 12 murders compared to 38, means that there were improvements. Jamaica has a crime problem, with murder being number one,” he said.

The SOEs expired at midnight Tuesday.

The function was held under the theme ‘End Violence Build Peace’.