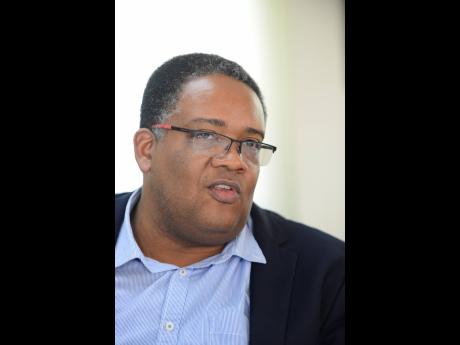 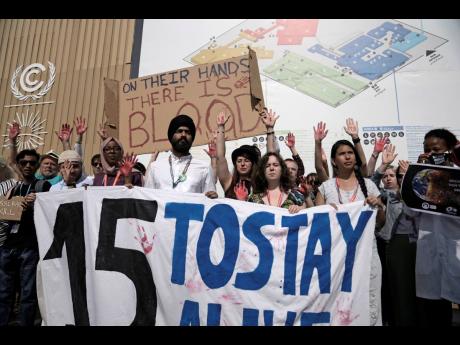 AP
Demonstrators participate in a protest advocating for the 1.5 degrees warming goal at the COP27 UN Climate Summit on Wednesday, November 16, in Sharm el-Sheikh, Egypt.
1
2

THE SHUTTERS may have come down on another United Nations climate change negotiations (COP27), but the work continues to shore up the capacity of Caribbean small island developing states (SIDS) to respond to and recover from the impacts of a changing climate.

For climate scientist Prof Michael Taylor, the first order of business has to do with building on the single most substantial gain for SIDS from the recent talks, which were held in Egypt: the commitment to establish a ‘loss and damage’ fund for developing countries.

This fund is to support the ex-post response of developing countries affected by climate impacts, the likes of which have been seen with the experience of extreme hurricane events in the Caribbean over recent years. Those events have caused loss of lives and billions of dollars in lost livelihoods and damage to infrastructure.

“[There is need for the] establishment of clear and transparent mechanisms outlining how the new loss and damage fund will be capitalised, operated, and accessed,” Taylor told The Gleaner.

“The region must also ensure that the adaptation and mitigation funds previously set up are not overshadowed or overlooked in light of the new loss and damage fund. They remain as much needed, and the same requirements of full capitalisation, transparent and fair mechanism for easy access are necessary. It is full time for us to see the transformatory impacts and results from these earlier funds being realised in small islands,” added the scientist, who is dean of the Faculty of Science and Technology at The University of the West Indies, Mona.

His stance is reflected in a November 19 statement from the Alliance of Small Island Developing States (AOSIS), whose members, including Caribbean SIDS, have been at the forefront of years-long lobby for the establishment of the loss and damage fund and who continued to champion its establishment at the recent COP.

“Establishing this fund signals to the world that loss and damage will no longer solely be borne by those governments and people least responsible. Today is a step towards climate justice.

“Consensus does not mean harmonious agreement, and w`e acknowledge the flexibility shown by all parties. In particular, we commend the Group of 77 and China and its chair and 194 members for the solidarity and resolve that made this momentous outcome possible. But this is not the end of the road. Our journey is just beginning,” read the AOSIS statement.

“We call on parties to work constructively to design and operationalise this fund over the next 12 months. It must be ready by the next COP. Parties should elect members to the Transitional Committee immediately and give clear mandates for them to get their work done. This loss and damage fund must become the lifeboat that we need it to be. But it is just a lifeboat, nonetheless, in a brewing hurricane,” added the entity, which has represented the interests of some 39 SIDS and low-lying coastal developing states in international climate and sustainable development negotiations and processes since 1990.

Meanwhile, Taylor said there is also a clear need for “greater ambition with respect to greenhouse gas emissions”.

“There is need to keep the 1.5 goal alive. The threat to regional viability of higher warming has not disappeared. In fact, it has gotten worse with current ambitions,” warned the physicist, who was one of the lead authors of the Intergovernmental Panel on Climate Change’s special report on global warming of 1.5 degrees Celsius.

“The region must be vigilant in ensuring that the new loss and damage fund is not seen as an excuse or compensation for not achieving mitigation targets. We still need significant reductions, so that the loss and damage to come will be as minimal as possible,” Taylor added.

That special report on 1.5 degrees Celsius of global warming flagged the need for significantly scaled-up adaptation and mitigation actions to successfully limit increasing global temperatures to 1.5 degrees above preindustrial levels in order to prevent the likely catastrophic impacts on countries, including Caribbean SIDS, that are especially vulnerable to climate risks and threats – from sea level rise to extreme hurricane and drought events, and the associated public health implications.