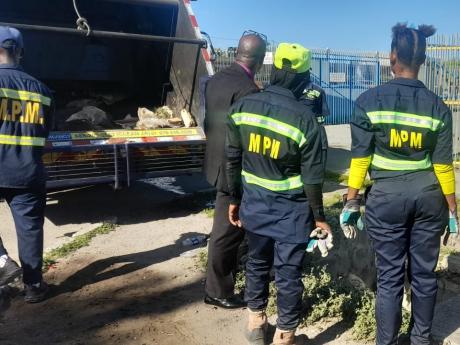 For months, residents of several communities have complained bitterly about uncollected garbage.

Today's launch of 'Operation Sweep' came a day after the government handed over 50 new garbage trucks to the NSWMA.

This morning, busy NSWMA workers could be seen removing garbage in several communities in sections of Portland, Clarendon, and St Catherine.

While on the ground in Portmore, St Catherine, NSWMA executive director Audley Gordon said several of the new units will be assigned to the municipality given the need in the area.

"50 trucks were handed over to us yesterday and we decided to dispatch 12 to Portmore to start the operation that will go right through Christmas into the New Year," Gordon disclosed.

He said that the massive pileup of garbage in Portmore and other areas must be tackled as a matter of urgency.

"There is a backlog right across the entire Portmore. My understanding is that there are about 60 to 70 loads, but whatever it is we don't want no backlog, so the plan is for the municipality to be backlog free by Christmas," Gordon stressed while expressing appreciation for understanding by residents.

He noted that Portmore Mayor Leon Thomas and Portmore Members of Parliament were invited to participate in the roll out of the operation but only St Catherine South East MP responded.

Miller, for his part, expressed joy that the garbage issue in Portmore is being addressed.

When contacted, Thomas, who was with relatives due to a death in his family, said he only learned about the programme this morning.

"The people of Portmore know that I have been advocating day in, day out for a proper garbage collection and solid waste management system in the municipality for quite some time, had I been informed earlier, even with my present situation, I would made every effort to be present," Thomas told The Gleaner.