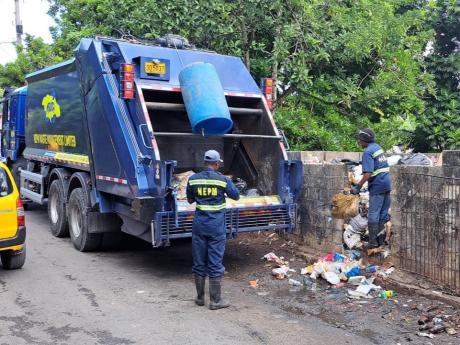 The clean-up blitz, which commenced shortly before 6:00 am, saw 13 trucks being dispatched across the parish of Portland. Gareth Davis Snr. Photo

Several communities in East and West Portland benefited from a massive clean-up blitz carried out by the National Solid Waste Management Authority (NSWMA) today, to eliminate the garbage pile-up.

The clean-up blitz, which commenced shortly before 6:00 am, saw 13 trucks being dispatched, including three from the newly acquired fleet.

Public Health Manager for the North Eastern Parks and Markets (NEPM) region, Patrick Marshall, said that the focus is on removing the pile-up of garbage in all communities throughout the parish, with the intent to allow residents to experience a much cleaner Christmas holiday.

“We are focusing on the aging backlog that was here for the past six months or more,” commented Marshall.

“This is a part of a two-phase programme where we will be here again next week Monday and we will go into all communities. If there is a need, we will bring in additional resources to ensure that the clean-up exercise is a success. Residents can expect a more timely and frequent garbage collection. It may not solve all the garbage issues that we have here in Portland, but it will definitely have a great impact going forward.”

“This is indeed a blessing and I am only hoping that the three new trucks will improve the garbage collection, not only in Breastwork, but also elsewhere,” said resident Joy Campbell.

“People from just about everywhere passed by this skip and dump their garbage even along the roadway. Overtime the area becomes heavily polluted with garbage and it becomes a breeding ground for rats and feeding ground for dogs. Even dead animals are dumped in this area of Breastwork and are left to rot. When you pass this area it is stink.”

Customer Relations Officer at NEPM, Donasha Biggs, pointed out that a rigorous public education campaign will be undertaken by the NSWMA to educate residents on the importance of how to dispose of their waste properly, as well as how to engage in recycling of plastic containers and other material.

“With the addition of the newly branded trucks, residents will see an improvement in the collection of garbage on a weekly basis,” said Biggs.

“We try to encourage residents to do a bit of recycling such as composting and to separate their plastic bottles and so on, which will see them generating less waste at times. The NEPM region is compromising no effort in ensuring that our residents are aware. And awareness brings about change.”

“The region (North East) has been given ten trucks, three of which are assigned to Portland, “she concluded.