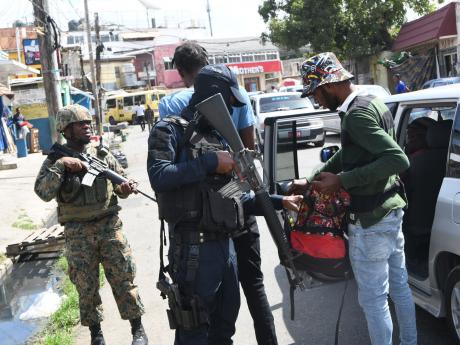 PSOJ said the meeting was arranged to facilitate open dialogue on the divergent views of the People’s National Party (PNP) and the PSOJ on the use of States of Public Emergency (SOEs) as a tool in the Government’s crime fighting strategies. - File Photo

Executive members of the Private Sector Organisation of Jamaica (PSOJ) have met with Leader of the Opposition, Mark Golding, and Peter Bunting to discuss national security matters and to work towards strengthening the relationship between the parties.

PSOJ said the meeting was arranged to facilitate open dialogue on the divergent views of the Opposition People's National Party and the PSOJ on the use of States of Public Emergency (SOEs) as a tool in the Government's crime fighting strategies.

The PNP has consistently raised concerns about the constitutionality of the measure.

In a press statement today, the PSOJ said it aligned with the Opposition on the following positions:

The security forces should maintain a presence in violence-prone hotspots after the SOEs expire.

The development of the Enhanced Security Measures Act (ESM), which seeks to target violence producers, is concluded in short order.

The Opposition expressed its willingness to work collaboratively with the Government in a spirit of mutual respect, which the PSOJ endorses.

According to the PSOJ, the Opposition reiterated its position that it is willing to assist the Government with drafting these measures with the objective of completing them before Christmas.

“The ESM [Enhanced Security Measures Act] is critical to Jamaica's crime reduction strategies, and the PSOJ is strongly encouraging the Government to engage the Opposition through this process to bring this matter to a close in the best interest of Jamaica,” the private sector body said.

The PSOJ said during the meeting, while it acknowledged the constitutional concerns raised by the Opposition, it reiterated its position that the SOEs were required to address the continued high rate of murders.

The Opposition reiterated its disagreement with using the SOE as an ongoing crime-fighting tool, according to the organisation.

It said it expressed the view that once the Enhanced Security Measures Act is in place, it could be used in tandem with the security features of the Zones of Special Operation (ZOSO).

“This will enable the police force to maintain the critical pillar of the crime reduction strategies to manage and reduce the crisis level of murders and violent crimes the country continues to experience. The requirement for SOEs would only be required for extreme scenarios and not for 'routine' use, which is the Opposition's primary concern,” the PSOJ said.

The PSOJ is asserting that there needs to be a focus on early childhood and primary education to improve education outcomes.

Further, citing what he called a serious deterioration in the quality of life of citizens living in many communities across Jamaica, the PSOJ also highlighted the need to focus on lifting the level of social investments in these areas.

“The Opposition is totally aligned with the crime prevention strategies and it indicated that it has been advocating for these strategies over an extended period of time,” the PSOJ said.