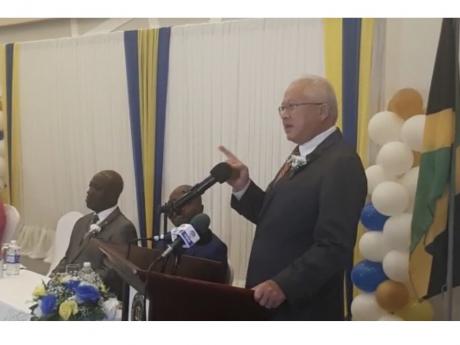 Minister of Justice Delroy Chuck speaking at the commissioning of Justices of the Peace in Ocho Rios, St Ann on December 1, 2022.

Justice Minister Delroy Chuck has blasted public passenger vehicle operators who are demanding an amnesty on outstanding traffic tickets, telling them it is a matter for the court and not the government.

Speaking at a Justices of the Peace commissioning in Ocho Rios, St Ann on Thursday, Chuck declared that the government will not give in to calls for the implementation of the measure.

The operators have stated that they need time to pay the outstanding tickets.

But, Chuck said the government will stand firm against the audacity of persons who have violated the road code and want an amnesty.

“This government will not back down and we're determined that for every single violator there will be consequences,” Chuck warned.

Last month, several operators across Jamaica withdrew their services in a demand for the ticket amnesty, with some pointing out that the government implemented an amnesty for illegal guns ahead of the new stringent firearms act.

But Chuck made it clear that there would be no leeway from the government given the high volume of outstanding traffic tickets that have clogged the courts.

Chuck said outstanding tickets are being sorted out and will be on the justice ministry's website.

Violators will be caught and taken to court, he warned.

He said that based on the system being implemented, persons with outstanding tickets will not be able to renew their driver's licences or register their vehicles.

Chuck lamented the carelessness of some drivers on the roads, saying their day of reckoning is at hand.

He called for drivers across Jamaica to obey the road code.