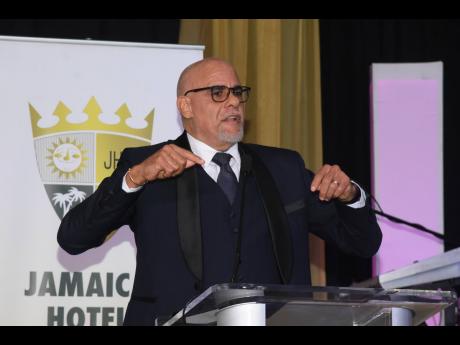 Private Sector Organisation of Jamaica (PSOJ) President Keith Duncan has said that corruption and other crimes continue to be an Achilles heel for the country, preventing it from realising its true potential despite achieving macroeconomic stability.

“Crime and corruption, by some estimates, cost our economy about $100 to $200 billion per year. We’re not saying that we can eliminate it, but we can move it in the right direction,” Duncan said on Thursday during the Public Bodies Corporate Governance Awards at The Jamaica Pegasus hotel in New Kingston.

“As a nation, we have a tremendous resolve to be fiscally responsible and to continue to reduce our debt-to-GDP ratio, which is projected to close the year below 90 per cent, and that’s below pre-COVID levels. Jamaica has achieved macroeconomic stability by collaboration, by working together, social partnerships. We have achieved macro-economic stability under the leadership of both political administrations, and the commitment and the drive has continued for us to achieve this sustainability” he added.

The PSOJ president said it is important that systems of governance to facilitate transparent and efficient operations be implemented, noting that with Jamaica ranking at 70 out of 180 countries in Transparency International’s Corruption Perception Index at the end of last year, it was clear that the country has a serious problem.

Duncan lamented that corruption has been normalised and accepted in much the same way as the island’s crime epidemic.

“We accept this as being normal, and that is something that we now need to have a mindset change around. In the same way that we have been able to manage our fiscal affairs and our economy to put us in this place, we need to do some work in this area.

“If we were able to reduce levels of crime and corruption, there would be more fiscal space, which would give us the ability to invest more in the public service. For example, in transportation, infrastructure such as roads, housing, because we have a ton load of squatter communities, 524 across Jamaica, populated by 700,000 citizens, without proper sanitation, sewage, etc,” Duncan added.

Meanwhile, the Factories Corporation of Jamaica took the coveted Greta Bogues Award for Excellence in corporate governance during the ceremony. It also won the Finance Minister’s Award for Board Composition, Functions and Structure as well as the Jamaica Stock Exchange Award for the Best Annual Report.

The National Health Fund, which was dethroned from the top spot, won three awards: the Minister of Finance and the Public Service Award for Risk Management and Internal Controls; the Jamaica Stock Exchange Award for Best Website; and the Finance Secretary’s Award for Corporate Governance Policies, Procedures, and Practices.

Other winners include the Office of Utilities Regulation, which got the Ann Marie Rhoden Award for Compliance and Disclosure of Information, and the Port Authority of Jamaica, which took the PSOJ Award for Most Improved Public Body.