Rotary Club senior citizens’ treat back on this year 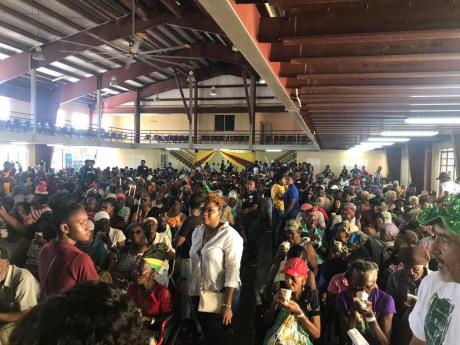 Contributed
Centred in a crowd of seniors is Rotarian Tamara Foster at the 2019 staging of the Rotary Club of Kingston’s annual senior citizens’ Christmas treat. The event had been suspended for two years due to the onset of the COVID-19 pandemic. 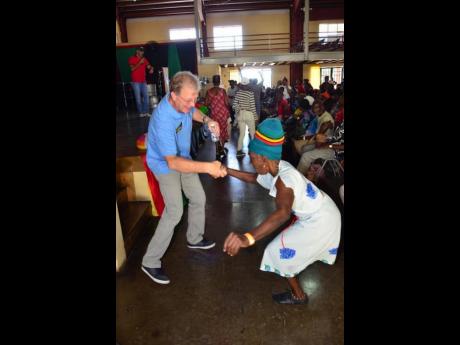 Contributed
Rotarian Mathew Pragnell dances with a one-legged senior at the 2019 staging of the Rotary Club of Kingston’s annual senior citizens’ Christmas treat, which was hosted at The Wolmer’s Boys’ School auditorium.
1
2

The Rotary Club of Kingston (RCOK) will host its annual senior citizens’ Christmas treat on the first Saturday in December, an event which will see some 1000 seniors from retirement homes across the Kingston metropolitan fêted, fed, and presented gifts at the day-long affair.

President of the club, Karsten Johnson, told The Gleaner that the non-profit organisation was delighted to again stage the event which had been deferred for two years due to the COVID-19 pandemic.

He said Christmas was a special time that allowed the seniors, who would not usually experience such levels of camaraderie and celebrations, to have a good time with the younger generation, and noted that the seniors looked forward to the club’s visit every year.

“We see the joy and the happiness on persons faces when this time comes around.

“We look forward to share that with them ... as it gives us a chance to put ‘service above self’ in that manner and share goodwill with them,” he said.

Speaking to the details of the planning, execution and costs involved in organising the event, Johnson said the club typically receives sponsorships in excess of $1 million to assist. He said the auditoriums of the eight Interact schools are typically used to hold the event, and the seniors are usually transported from their respective homes.

Johnson said that as COVID-19 protocols were still in place for the vulnerable population at these homes, the 71 members of the club as well as the approximately 100 members of Interact, a division of Rotary club based in secondary schools, and Rotaract members, a young professional arm of the Rotary club, would visit the homes individually and present the gifts and other goodies.

In July, the RCOK débuted its major project for the period 2022–2023, titled ‘Empowerment Through Accessibility’.

This came about after the service club learned of and saw first-hand the challenges which faced residents at the Cheshire Village in St. Andrew. The Cheshire Village is an integrated community with 21 housing units for former patients of the Sir John Golding rehabilitation centre who are both able-bodied and disabled.

It was built in the 1970s in response to a shortage of housing for persons with disabilities. However, many of its amenities and facilities remain inaccessible for functional and independent use by disabled residents.

But getting residents access to electricity and installing solar-powered street lights along hallways for security purposes are top priorities to be executed by year end, said Johnson. This has been estimated to cost US$6,500.

The overall project will cost US $25,000 of which approximately US$7,000 donations has already been received.

“It’s an ongoing process [but] we are trying to do what we can while funds come in so that we don’t try to do everything at once because it’s a lot,” he said.

“We recognise that there are many gaps, especially in a society like ours where the government cannot fulfil half of the problems that we have and without the input of service clubs and organisations like ours, most times ... the most vulnerable persons get left behind,” he said.

Johnson continued that the needs of the people “staring us in our eyes every day”, motivated club members to continue volunteering, and expressed his hope that more public sector partners would help the club in addressing the needs of the most vulnerable.