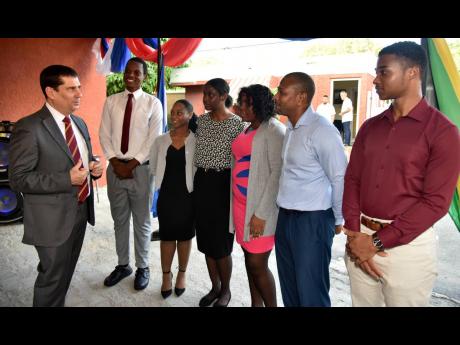 The Embassy of Cuba in Jamaica has awarded scholarships to seven Jamaican medical students under the age of 25 years, granting them the opportunity to further their education in the field of medicine.

These full scholarships were awarded as part of the Cuba-Jamaica Bilateral Scholarship programme, which has been in existence since the 1950s and has been assisting successful candidates in their pursuit of graduate and postgraduate studies in Cuba.

The programme was discontinued for two years due to the COVID-19 epidemic, which started affecting the world in 2019.

At the awards ceremony on Wednesday held on the grounds of the Cuban Embassy in St Andrew, past scholarship recipient, Dr Lorenzo Gordon, an internal medicine specialist, gastroenterologist and diabetologist told the youngsters to go to Cuba “with a zest for knowledge”.

Reflecting on his own experience while participating in the programme, Gordon said that the Cuban people were very friendly and hospitable and they eventually became “like family”.

Similarly, Dr Neville Graham, a former participant of the programme, who is now a consultant general and vascular and laparoscopic surgeon, implored the recipients to take hold, with both hands, the “golden opportunity” they were presented with.

“When you go there just embrace the culture ... select your friends and you must focus on why you are there. You all are going to represent Jamaica ... [and] yourself as an individual, your family and your community,” he said.

Jovaro Brown, 19, who is one of the seven scholarship awardees, told The Gleaner that he was not afraid to take risks to secure a successful future, even if it meant temporarily migrating from Jamaica in order to pursue his education in a Spanish-speaking nation where he is not proficient in the language.

“I always like challenges. I’ve had a love for Spanish ever since I was a kid so that was really a motivator for me,” he said.

His goal is to specialise in urology, but he will first engage in earning his doctor of medicine degree.

In his remarks, Fermin Gabriel Quiñones Sánchez, the ambassador of the Republic of Cuba to Jamaica, expressed his hope that the recipients will take advantage of the opportunity to improve their lives and communities they live in upon returning to Jamaica.

“To you, dear students, I’d like to say we are truly certain that you will become successful medical professionals and you will return to Jamaica ready to make a substantive contribution to your country’s development and to the well-being of Jamaica, especially those who are the most needy,” he said.