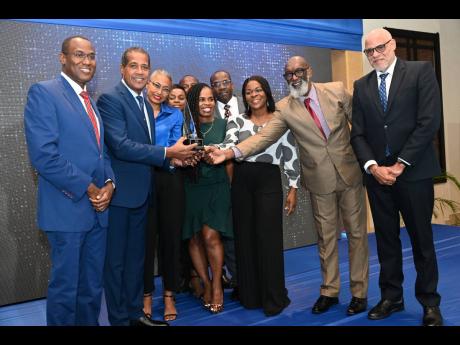 Rudolph Brown
Dr Nigel Clarke (left), minister of finance and the public service and Keith Duncan (right), president of PSOJ present the Greta Bogues Award for excellence in Corporate Governance to Lyttleton Tanny Shirley (second left), chairman of Factories Corporation of Jamaica, Dr Donald Farquharson, managing director of Factories Corporation of Jamaica and their team at the Ministry of Finance and the PSOJ Public Bodies Corporate Governance awrds at The Jamaica Pegasus hotel on Thursday.

Thursday’s overwhelming victory at the fifth staging of the Public Bodies Corporate Governance Awards was especially sweet for the Factories Corporation of Jamaica (FCJ) team, with Chairman Lyttleton ‘Tanny’ Shirley and Managing Director Dr Donald Farquharson lording it over the other 16 participants, especially the National Health Fund (NHF) which had won the overall award three times.

In addition to winning the coveted Greta Bogues Award for Excellence in Corporate Governance, the FCJ also took Finance Minister’s Award for Board Composition, Functions and Structure, as well as the award for the Best Annual Report at the fifth staging of the Public Bodies’ Corporate Governance Awards held at The Jamaica Pegasus hotel on Thursday.

“This is a big deal, FCH has 126 staff so believe it or not, we’re striking way above our weight class,” a proud Dr Farquharson declared before turning the microphone over to Chairman Shirley, who explained that winning represented a remarkable turnaround for the agency, following a damning report from the auditor general six years.

“We have worked very hard, consistently. When we took over the board we inherited, we inherited a damning report from the auditor general that the agency had become intoxicated with missteps in corporate governance. Today, we can proudly say that we are, as a body, sober as a church mouse.

“We did that by looking at the organisation and first looked at the board structure and we believed and we mandated ourselves to be the leading example of how we are going to guide the management. We accepted the fact that to do so we had to be responsible, transparent, honest and independent and we passed on that message to the management,” he explained.

The first step into the right direction, according to Shirley was the selection of a very competent board, well respected and with an excellent track record, to lead the process. However, even with these qualifications, the task ahead of Dr Donaldson and the rest of the team seemed insurmountable, Shirley recalled.

The next step was to set up the relevant policies to guide these committees once they were established.

“I must congratulate the managing director and his team. They have done a fantastic job in following policies, understanding the role that the board set out and the high standard. So it was not surprising that in 2019 we won five corporate governance awards. In 2020 we won six and today history has unfolded, but we won’t be satisfied with this achievement today,” he warned.