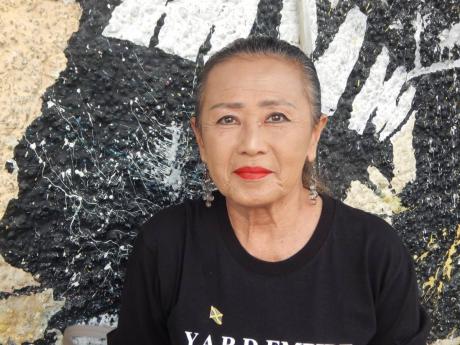 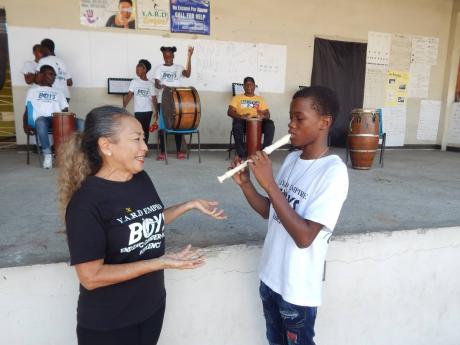 Michael Reckord
The social worker listens as Aniko Campbell plays the recorder with which he recently passed an ABRSM Level 1 exam, with merit. 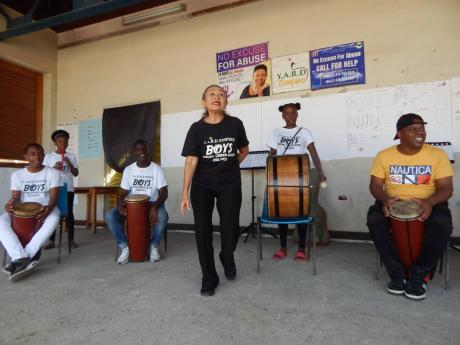 Michael Reckord
Salmon dances to the drumming by Jermaine Gordon (right), who is teaching percussion to YARD Empire students.
1
2
3

For all her adult life, Terri Salmon has believed in the power of the arts. First as a dancer, then as an actress, she entertained audiences in numerous theatre productions for decades.

Now, she is helping people more directly as a social worker and head of the non-governmental organisation (NGO) Youth for Arts and Recreational Development (YARD) Empire, which she founded six years ago. Her audience (students) these days are at-risk young people, and her focus is on stemming gender-based violence using the knowledge and skills in the arts she got as a performer.

She knows that gender-based violence affects everybody, but she is concentrating on influencing boys because of her own experiences while her two sons were at different high schools for boys. She would see relatively few parents at Parent-Teacher Association meetings and made a causal connection between those absences and her sons’ classmates getting into bad company and often being injured or murdered.

That’s why, on Saturday mornings, at about 7 o’clock, she can be found teaching between 10 and 20 boys and girls at premises owned by the Social Development Commission (SDC) at the corner of Hanover and East Queen’s streets in Kingston.

Two Saturday mornings ago, when The Gleaner visited, about a dozen children were taking drumming lessons. “We’ll be here until about three,” Salmon said.

Except that on that particular morning, she and her assistant for the day, drummer Jermaine Gordon, a graduate of Edna Manley College (EMC) School of Music, were taking the youngsters further into the heart of the city to help in an island-wide social project. They were heading for Breezy Castle, Harbour Street, to be part of ‘Community link-up’, an initiative of the Private Sector Organisation of Jamaica and the police.

On another Saturday, Salmon might have been assisted by Alwyn Allen, a teacher of drama and gender issues, or Sheldon Blake, an artist whose murals adorn the outside walls of the compound. They, too, are EMC graduates.

“I try to use the best teachers available,” said Salmon, adding that for the past three years since she has been at Hanover Street, she has been getting funding from the Bureau of Gender Affairs. Her journey there has had as many ups and downs as a roller-coaster ride.

Salmon was not involved in any projects in the first year after YARD Empire was launched. “Nobody knew about us,” she explained.

Then five years ago, she got a six-week project at Goodwin Park Boys Home and, from her, with the help of School of Drama lecturer Pierre Lemaire and senior EMC students, the boys, got lessons in dance, drama and art.

A similar six-week project with classes twice a week at a correctional facility in Lauriston, Spanish Town, followed. It involved the rehabilitation of boys under 18. Over the next few years, Salmon and the NGO team conducted even more elaborate programmes at other correctional facilities.

“One of them had youths charged with very serious crimes, including rape and murder,” she said.

Some of the projects were supported by the Organisation of American States and involved the young people telling their life stories to their warders, the warders being trained by Salmon to produce skits from the stories, and finally, Salmon pulling them all together as dramas.

Salmon said the plays were so emotional that the boys and “some of the warders” cried. She added that Pearnel Charles Jr, then in the Ministry of National Security, was also very moved by one play he witnessed and asked her to do others in other juvenile homes.

When the projects came to an end, much to Salmon’s regret, she decided to work in at-risk communities. She found the SDC premises, asked if she could use it and after a year, got it some three years ago.

In twice-a-day Saturday sessions, she now teaches the arts to youngsters, some of whom are not able to attend regularly because violence in their communities prevents them from leaving.

She is making a difference, she said. Not only is she seeing discipline developing in the children, but they have been getting tangible rewards.

Students have learnt to play their instruments so well that two passed ABRSM exams in the recorder and bronze medals in Jamaica Cultural Development Commission (JCDC) music competitions have been earned. She is currently preparing her students to again enter JCDC music competitions in guitar, recorder, and drumming.

“We’re going for gold this time,” she said.