19 killed, 45 injured in fires so far this year – McKenzie 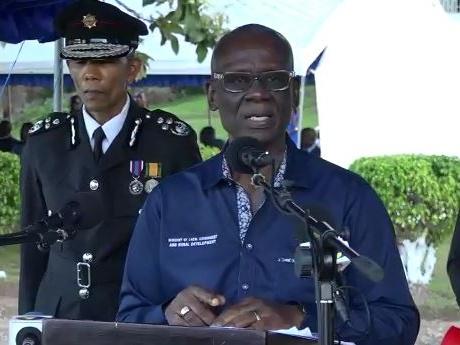 Minister of Local Government Desmond McKenzie speaking at a graduation of firefighters in St Mary on December 3, 2022.

Nineteen persons have been killed and 45 injured in fires since the start of the year, according to Local Government Minister Desmond McKenzie.

McKenzie, who was speaking at the graduation of a batch of 109 new firefighters in St Mary on Saturday, said 1,468 persons were left homeless between January and October.

The fire brigade received over 15,000 emergency calls over the 10 months, the minister disclosed.

A record number of 20 women were among the batch of graduates, with McKenzie commending them for joining the fire brigade.

McKenzie commended the fire brigade for contributing "significantly" to saving lives and property.

He, however, lamented what he said has been the indifference Jamaicans have shown to firefighters over the years.

"Some times the Jamaican people do not recognise and appreciate the work of the Jamaica Fire Brigade and I want to urge you not to get discouraged when you hear people cuss..."

McKenzie said when people do things to create fires, like electricity theft, firefighters cannot be blamed for the lack of responsibility shown by some Jamaicans.