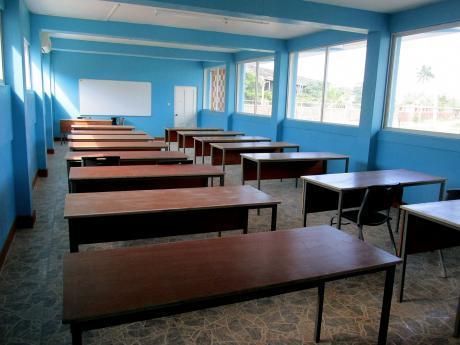 The 17-year-old was taken into custody and his injured father was taken to hospital by the school’s security.

A five-year-old boy says he will not return to school on Wednesday after witnessing the stabbing of a father by his teen son.

The child, a student of Eagles Wings Preparatory in Bogue, Montego Bay, St James, said the blood from the wound received by the man, who is reportedly a pastor, stained his shirt and his pants.

His father had to leave his shirt with the school for evidence.

The youngster, who spoke with The Gleaner in the presence of his parents Tuesday evening, was traumatised by the experience.

“I am scared, I saw the two big men, they were fighting and the blood was all over me. They stain me up with all the blood. I was crying. I wanted to go home,” he said.

His father said he and his son's mother received a message from the school about 12:24 p.m. Tuesday alerting them that there was a traumatic incident on the compound, and they should pick up their children immediately.

According to him, the attacker was a 17-year-old past student who he said should not have been allowed on the compound.

He accused the school of being negligent.

“The security was reportedly in the lunch room so the gate was left unattended,” he claimed.

The father says that although the Ministry of Education is sending grief counsellors to the school tomorrow, this would not be enough for his son.

“When we went to the school our son was shirtless, and although remnants of the blood were wiped from his face, there was blood in his ears, on his hands and pants.”

According to him, children were being picked up by their parents and they were screaming.

He said that he raised concerns in the school's Whatsapp group and, according to him, the principal replied that he should be empathising with the institution.

“If this trauma affects him for years to come, what do we do? He has an injury to his foot, which seems like he was running away from the incident. Based on my understanding, my son was very close to the incident.”

The school's Principal Consuelo Ricketts said there was never a problem with the past student who she said visits the school from time to time.

“The father asked me to call him if his son came there. Not knowing there was something behind it I called him. He came to the school and grabbed him in the shirt. I told the father I would not be allowing that behaviour in the school,” said the principal.

The father was the aggressor, she revealed, adding that as much as his son tried to prevent the altercation, the father persisted.

She said she is as traumatised as her staff and students because even when the father was unable to access his son, he went into his car to get a pick-axe to do further damage.

The 17-year-old was taken into custody and his injured father was taken to hospital by the school's security.