Cabinet to get study on cost of violence against women 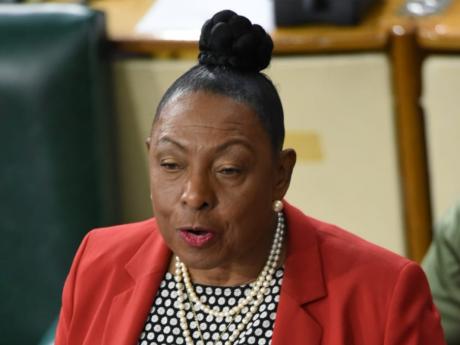 Minister of Culture, Gender, Entertainment and Sport Olivia Grange speaking in the House of Representatives on December 6, 2022. - Ian Allen photo.

Minister of Culture, Gender, Entertainment and Sport Olivia Grange says she will soon present to Cabinet a study on the economic cost of violence against women.

The study was commissioned by UN Women and highlights the importance of ending violence against women and girls with the support of legislation as well as plans and programmes.

In addition, the study also highlights the need to allocate budgetary support to fund initiatives to provide essential services to affected women and children.

Grange's comments came during Tuesday's debate on a motion that is seeking to formally establish a women's caucus comprising lawmakers from both Houses of Parliament.

The motion seeks to amend the Standing Orders of the House of Representatives to allow for the bicameral caucus to be established as a sessional select committee to sit jointly with a similarly comprised committee of the Senate.

In opening the debate, Grange said that violence against women and girls has had serious effects on society.

The direct costs of this scourge, according to Grange, include funding health, police, courts, shelter, counselling and legal aid services, indirect costs related to loss of income owing to absence from work, missed school days, lost time on the labour market, lost productivity and earnings, as well as pain and suffering.

She told her parliamentary colleagues that the women's caucus is prepared to work together regardless of political persuasion.

“We are committed to creating a space for the deliberation of women's rights, for lobbying for the social and economic improvement of our women, and for the promotion of a society in which women and girls are protected,” Grange said.

According to Grange, the women's caucus has agreed to facilitate networking, build solidarity, and promote constructive dialogue across party lines and chambers, and to provide caucus members with professional development opportunities to strengthen their leadership capacity.

The women's caucus is also seeking to raise awareness on gender equality and the importance of women's leadership among all parliamentarians and parliamentary staff, as well as among the general public.

Debate on the motion was suspended until next Tuesday when the opposition spokesperson on gender affairs will make her contribution.