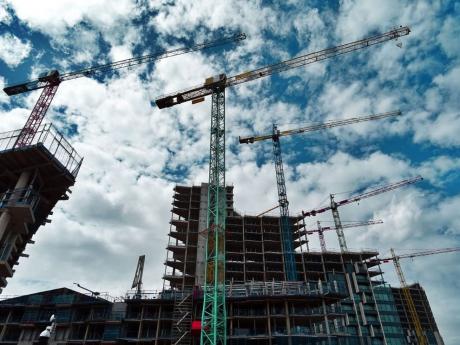 The group is calling for the authorities to make available for easy online access by citizens, up-to-date records of all building applications. - Contributed photo.

Representatives of 29 citizen associations in the Corporate Area are expressing discontent with what they say is the government's lack of transparency regarding the development approval process for high-rise apartment buildings being constructed in residential neighbourhoods.

They are taking issue with how approvals are granted under the Provisional Development Order of 2017.

The concerns were voiced in an open letter addressed to Prime Minister Andrew Holness on Monday and is among several other letters that have been sent to other stakeholders such as the Kingston and St Andrew Municipal Corporation (KSMAC) and the National Environment and Planning Agency (NEPA).

Speaking with The Gleaner on Tuesday, Hugh Dixon, a member of the Queensway Citizens Association, stated that the group, dubbed "Citizens Rights to the City", is requesting that no confirmation of the development order be granted without consultation with residents so that they can participate in the necessary amendments to be made based on findings and recommendations.

The representatives, in the letter, suggested that the government pause plans to confirm the development order and instead, within a five-year period, properly assess and amend the order where necessary.

The letter expressed that “several communities have had an explosion in multi-storey, residential development and commercial activity. The volume and pace are far ahead of the capacity of the KSAMC and other agencies to ensure compliance with building and planning laws...resulting in widespread breaches.”

Dixon expressed that the group met with Mayor of Kingston Delroy Williams but that “the matter was not even dealt with the way it should have been...to get the matter resolved.”

He said some of the negative impacts residents have had to endure include increased traffic and noise levels, decreased green spaces, loss of privacy by homeowners, the blockage of natural airflow and light, increased run-off from paved surfaces adding to more flooding concerns, increased garbage and more pressure on already inadequate water supplies.

Dixon stated that within the Charlemont Drive area alone there were at least eight approvals for construction to take place which have either commenced or are about to begin shortly.

“You are at home and all of a sudden you see a fence put up next door to you, blocking out the view and then you realise that construction is going to go there, and on the other side, one month you wake up and then two high-rise structures are beside you,” he said, arguing that this leaves small, single-storey houses boxed in.

“A lot of the buildings that are going up are in breach because what has happened is that you have approvals being given, for example, 12 habitable rooms, but these guys are so skillful that they submit a 12-room thing [but] subdivide it and make it 24,” he contended.

Dixon further noted that one of the biggest issues that residents face is the cost of taking legal action against the developers who are in breach.

At a meeting of parliament's Infrastructure and Physical Development Committee on November 30, Xavier Chevannes, chief technical officer at the KSMAC, disclosed that of 183 developments carried out between January and March, 36 of them were built without the approval of the municipal corporation.

He added that 14 developers were issued stop orders,13 were being investigated and eight were deemed as special operations.

In an update to the committee, Chevannes revealed that 60 per cent of the developments sought to be regularised, 25 per cent had stopped construction, and another 25 per cent ignored the stop orders.

Dixon told The Gleaner that his citizens' association was “in fight right now” due to plans for a high-rise building in the area.

The group is calling for NEPA, Natural Resources Conservation Authority (NRCA) and the KSAMC to make available for easy online access by citizens, up-to-date records of all building applications, including outline planning permission, permit numbers of pending developments, results of applications (approved, denied or modified), stop orders and inspection reports.