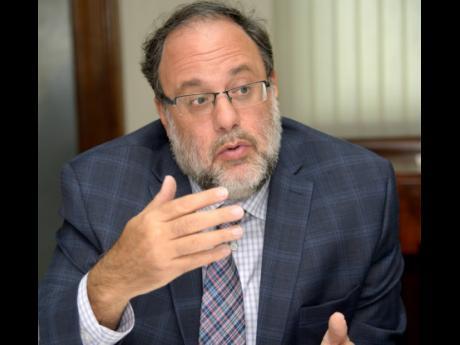 Leader of the Opposition Mark Golding is blasting the Government for reimposing states of public emergency (SOEs) in several parishes.

And St Ann was now included in the areas under a state of public emergency.

In a statement, Golding criticised the Government for reimposing the SOEs as Jamaicans roll into the festive Christmas season.

He reiterated the opposition's stance that the use of SOEs as a policing tool is not a sustainable path forward for Jamaica.

Further, he said the opposition believes that the repeated use of SOEs is unlawful.

"It subverts the basic scheme of our Constitution, by allowing the Government to suspend the basic rights of the people in circumstances where it is not clearly justified by an immediate threat to our democratic system of government," he said.

"The PNP is of the view that a strong security presence should be maintained in communities that are facing high levels of violence. The use of the soldiers and police in this way is permitted by our normal laws, and does not require an SOE," he argued.

The Prime Minister this morning announced the declaration of another round of States of Emergency, as we roll into the festive Christmas Season.

There was no consultation with the Opposition prior to this decision being made; no briefing as to the specific security issues which are being relied on as justification for another rounds of SOEs.

This clearly shows once again that the Government has no regard for the Opposition. Mr Holness prefers to be wrong and strong, pressing on with his SOE policy. His behaviour indicates that he really does not want our support, no doubt believing that it is to his political advantage for the Government and Opposition to continue to be at odds over this issue.

We do not see the use of SOEs as a policing tool as a sustainable path forward for Jamaica. Putting the majority of Jamaicans at risk of being detained for extended periods by police or soldiers without charge, is no way to address Jamaica's longstanding challenging problem of criminal violence.

Many lives of lawful young Jamaicans have been disrupted and irreparably damaged by being held in detention without charge for long periods, sometimes well in excess of a year, with a loss of their jobs and the stigma of being treated like common criminals.

SOEs are just about detention. But detention is not a sustainable strategy for reducing violent crime. Detention does not involve proper police work –there is no investigation, case preparation, effective prosecution and conviction in a court of law. SOEs, therefore, encourage sloppy law enforcement practises, because anyone can be held and kept in custody without the police having to bring a case to court to hold the criminals accountable and make them pay for their wrongs.

We do not believe that this repeated use of the SOEs is lawful. It subverts the basic scheme of our Constitution, by allowing the Government to suspend the basic rights of the people in circumstances where it is not clearly justified by an immediate threat to our democratic system of government.

The logic of this Government's approach would keep much of Jamaica under States of Emergency for years and years, with no strategy to get the real problem under control in a sustainable way.

People are now fed up of wasting time in long lines of traffic at checkpoints. After two years of Covid, people are looking forward to enjoying their Christmas season, and making some money from parties, shows and other entertainment. People are angry to know that this will be disrupted by SOEs. People are not comfortable to know that they are at risk of being detained without charge during the SOEs, if they do not comply with whatever they are told by the security forces.

We also have issues with the SOE Regulations, as modified this year, because they are excessive and easily abused:

• The Regulations make a criminal offence, punishable by months of imprisonment, if you do not answer any questions a police officer or soldier may put to you in a SOE area;

• The Regulations make a criminal offence, punishable by months of imprisonment, if you use “abusive language” in a SOE area;

• The Regulations make a criminal offence, punishable by months of imprisonment, if a spouse, parent or child do not to inform a police officer or soldier of any contravention of the SOE regulations by their loved ones;

• The Regulations allow “photographs, descriptions, measurements and fingerprints” under the Fingerprints Act and the DNA Evidence Act to be taken from anyone who has been detained without charge under the SOE, and there is no provision for that person's private biometric information to be destroyed in the event that the detainee is subsequently released without charge.

These are laws more like a fascist dictatorship, then a proud democracy which respects the basic rights and freedoms of our people.

The PNP is of the view that a strong security presence should be maintained in communities that are facing high levels of violence. The use of the soldiers and police in this way is permitted by our normal laws, and does not require a SOE.

If it is desired to give the soldiers power to act independently of the police, then Zones of Special Operations can be declared in troubled areas across Jamaica, and this will give soldiers the same powers as police in the ZOSO areas.

The police have indicated that the main problem they are trying to address is the 300 or so very violent gunmen who create mayhem in our country. The SOE takes away the rights of the majority of Jamaicans, well over a million people, when the target is 300 people. That is no crime plan. That is the approach of a fascist dictatorship.

I have suggested a court-supervised procedure to allow known violence-producers, on whom the police have credible intelligence, to be detained for a period of time to take them off the streets and out of their communities while a case is built against them that can sustain a charge.

I have suggested seven days initial detention backed by a court order, with further 14-days periods if the court is satisfied that a case is being built towards bringing a charge. The detained person has the right to apply to the court for release, if he can satisfy the court that he poses no credible risk of violence against others. After 49 days of court-supervised detention, the person must either be charged or released. If charged, he can be remanded in custody in the normal way.

This mechanism must be supported by additional resources to strengthen the intelligence-gathering capacity of the police and to expand the witness protection programme. More must also be done to prevent these persons in custody from being able to communicate with their cronies and run things from jail.

My fellow Jamaicans, there is no good reason to support this Government's abusive use of the SOE procedure. It is not a solution to our problems. It has not achieved a reduction of murders over the past five years, despite being used over 10 times during that period. It puts us all at risk by normalising a misuse of the most extreme powers under the Constitution, that exist to protect our democracy from subversion, not to undermine the basic rights and freedoms of our people.

It is our sworn duty as parliamentarians to uphold and defend the Constitution. I have been consistent that I will not fail in this solemn duty. The Government is intent on going down its own road, in another direction. That is not good for Jamaica. If asked, I am willing to assist the Government to develop a sustainable solution that does not involve the abuse of the Constitution.