Holness goes to Washington for help with crime 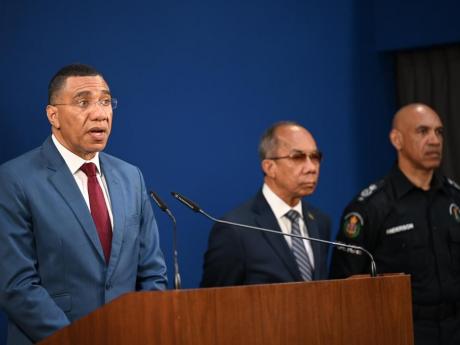 He is expected to meet with the Justice Department, Federal Bureau of Investigation and other state agencies. - Ricardo Makyn photo

Prime Minister Andrew Holness is to leave the island Tuesday afternoon for Washington, where he is slated to discuss security matters with a slew of US state agencies.

Holness announced the meetings during Tuesday morning's press conference at the Office of the Prime Minister in St Andrew, where he again declared states of emergency in several parishes.

He said that the aim of the meetings, among other things, is to try to sever the link between overseas players in the criminal underworld and those on the island, which often results in murders and bloodshed.

Holness said the meetings are to start the process of “getting a more intense cooperation in treating with the foreign actors in our local crimes”.

He is expected to meet with the Justice Department, Federal Bureau of Investigation and other state agencies.

“I'm serious. If you are overseas and you are sponsoring, directing, and soliciting; if you are financing crime in Jamaica we're going to get you,” the prime minister said.

He said that the move is part of efforts to build the capacity to fight the level of crime within the country without resorting to emergency powers.

“Those dons, those who have migrated overseas that in this season they would be sending the bag of rice and all the other goodies in the bag but secreted in that bag of rice, wrapped up in that blanket will be a gun or ammunition or parts thereof.

“Not to your benefit but to give to another youngster to kill. They can't feel that they are free to influence, direct, solicit and finance crime in Jamaica,” Holness said.