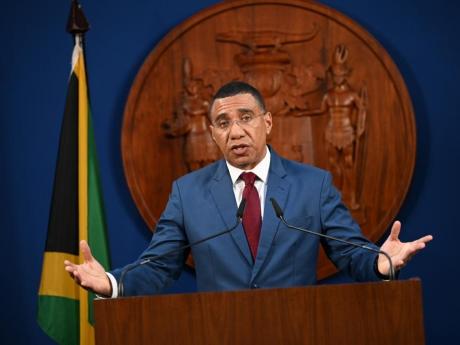 The reimposition of the rights-limiting SOEs sets up another fight with the parliamentary Opposition. - Ricardo Makyn photo

Meanwhile, St Ann is now also under a state of emergency.

The measures were announced at a media briefing at Jamaica House on Tuesday morning.

The reimposition of the rights-limiting SOEs sets up another fight with the parliamentary Opposition.

SOEs were declared in seven parishes on November 15 but those lapsed after 14 days after the Government failed to get the support of the Opposition in the Senate for their extension.

Holness had said he would support further declarations if the security chiefs recommended any.

During Tuesday's press conference, Commissioner of Police, Major General Antony Anderson, said in the areas where states of emergency were declared, 52 murders occurred in the two weeks before the imposition, 14 during the two weeks of the SOEs and 20 in the week after the SOEs were lifted.