SOEs will always be needed – PM 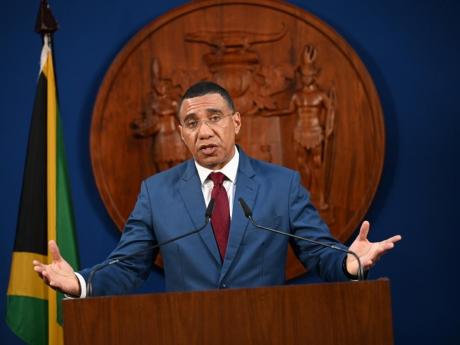 Prime Minister Andrew Holness says there will always be a need for the imposition of States of Public Emergency (SOEs) as the government is committed to cauterising crime, particularly murders.

Holness says the security measure remains an important tool available to the government to assist in crime-fighting efforts.

He was speaking this morning at the declaration of the reimposition of SOEs in Clarendon, St Catherine, St James, Westmoreland, Hanover, and sections of Kingston and St Andrew.

The measure has been extended to cover St Ann.

“My job is to ensure that my people are safe. And I will not stop until that is achieved. So will we need the SOEs? yes, there will always be SOEs. Nicaragua, El Salvador, Honduras they're all having to use these powers. France had an SOE for two years straight. Countries which we seek to pattern they have ongoing states of public emergency in different areas to combat different issues. It's a reality. Is it something we want to do forever and ever and ever absolutely not,” said Holness.

The Prime Minister argued that the Constitution needs to be adjusted to reflect current security realities.

“I think in the modern world, our Constitution needs to be upgraded so that those powers can easily and effectively be used when the circumstances required them. Emergency powers have always been an executive tool because it is the executive that has to respond and react. We need to, I think, upgrade and recraft how the emergency powers are used in our Constitution to deal with the modern threats that exist.”

He further underscored his disappointment and rebuffed arguments that the emergency powers and its use are unconstitutional.

He asserted that the measures are in fact being done within the constitution and arguments otherwise are untrue.