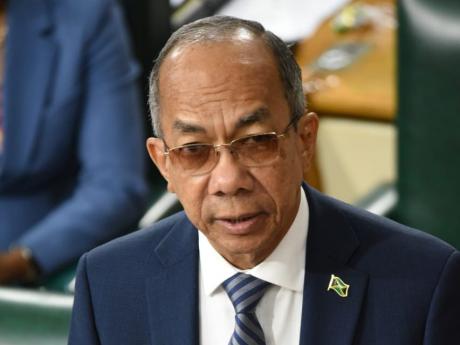 Minister of National Security, Dr Horace Chang, during the sitting of the House of Representatives on December 6, 2022. - Ian Allen photo.

The House of Representatives has approved a 60-day extension of the Zones of Special Operations (ZOSOs) in seven communities across Jamaica.

The current ZOSOs will expire on December 22.

Resolutions for the extensions were moved by Minister of National Security, Dr Horace Chang, during Tuesday's sitting of the House of Representatives.

Giving an update on the interventions being undertaken within the communities, the minister said they are at different stages of the "clear-hold-build" strategy.

Mount Salem and Denham Town will continue into the build phase while Greenwich Town, August Town, Norwood, Parade Gardens and Savanna-La-Mar will continue in the hold phase for this period of extension.

Chang said areas under the ZOSO continue to record reductions in all major crimes.

The national security minister said some 86 residents in Savanna-La-Mar are set to receive new birth certificates and clean-up activities have been carried out to improve the physical landscape of the community.

“The Norwood ZOSO is earmarked for significant build out of much-needed infrastructure, including supporting the rehabilitation of road and water supply. In the interim, several short-term initiatives are being executed. Currently, there are approximately$300 million in approved projects to be implemented in the community. These investments are projected to be implemented over the next 12 to 24 months,” he said.