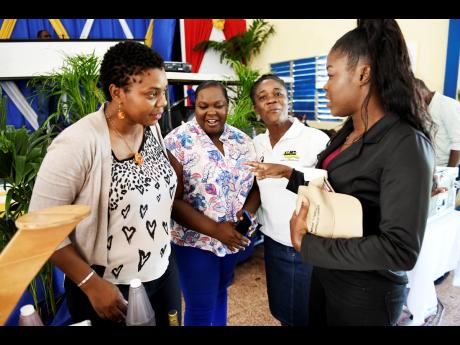 Farmers are expecting to reap great benefits from the soil doctor programme which was launched by the Agricultural Land Management Division (ALMD) within the Ministry of Agriculture and Fisheries. The event was held at the Ebony Park Heart Academy in Toll Gate, Clarendon, on Monday in commemoration of the December 5 which is celebrated as World Soil Day.

The soil doctor programme will assist farmers with testing and identifying healthy soils for their produce in order to maximise crop production with greater yield and healthier food.

Clarendon medical doctor and farmer René Bennett told The Gleaner that through soil testing, she has been able to cut spending cost on her farm which supplies hotels and supermarkets with corn, onion, Scotch bonnet pepper, among other produce.

“Through soil testing we know what the soil needs, so we don’t over-buy fertiliser, or we don’t overuse the fertiliser that we have, because we know we can get fertiliser from some of the natural elements that we have, like the nitrogen-fixing bacteria that is in the soil. So if we know that our soil is rich in nitrogen, we just put compost around it for them to break it down, so we don’t have to buy that,” Bennett explained.

“If the soil needs 30 per cent nitrogen, and you give it 70 per cent, it will push out that 40 per cent that it doesn’t need, so that’s a waste of money right there,” Bennett told The Gleaner.

Bennett said, however, that while the soil testing approach is good, financial factors pose as hurdles to many farmers being able to access the resources to boost their business.

“Everything takes financial assistance, and if you realise there is no loan agency [here today,] and that is what farmers need. The project is good, but even if we do find out what our soil needs, it means we need money to access it, so that is one of the gaps that we have in agriculture,” said Bennett.

Farmer Fontanette Whittingham also spoke of the benefits of soil testing to her crop production.

“Soil testing is very important to us, because it lets us know what type of plants to put in the soil, and to get maximum production, because at the end of the day that is what you want out of any endeavour that we are taking up,” said Whittingham.

State minister in the Ministry of Agriculture and Fisheries, Franklin Witter, said the ministry has already begun initiating the fundamental policy of the Grow Smart, Eat Smart strategy which includes soil health. According to Witter, the fruition of the project is reflected by a 17.4 per cent increase in domestic crop production for the third quarter of 2022, representing a sixth consecutive quarter of growth.

Witter added that the allocation of $50 million in this financial year to provide some 500 onion farmers with planting materials and agrochemicals to boost the production and productivity of onions, is also a testament to the ministry’s commitment to greater productivity that starts with soil.

Local agricultural groups have also been targeted and engaged in a series of capacity-building activities such as workshops, field trips and other exercises aimed at promoting participation in value chains that will enhance contributions to the rural economy, Witter said.

He added, “This demonstrates how serious the ministry is in enabling the expanded knowledge base of our farmers to use climate-smart agricultural practices, science and technology, and establish strategic partnerships on a spectrum that begins with the soil and ends with the highest food that is safe for consumption,” said Witter.

“It all starts with the soil, which means it should also start with the sustenance and management of healthy soils. If we are going to grow smart, [and] eat smart, soil management and improved soil health must be seen as major drivers in the cultivation of our food, because the soil is where food begins,” Witter posited.

Pamella McKenzie, ALMD’s acting senior director, told The Gleaner that the programme aims to target farmers from all spheres, from wide-scale farming to backyard farming.

McKenzie said if farmers are unsure of soil quality, they should contact ALMD to have samples collected for testing within its lab. She explained that soil results could take up to six weeks for processing. ALMD carries out a physical, chemical and a biological analysis of soil samples.

“The chemical analysis will tell you where on the nutrient spectrum what you have in your soil falls, then we can remedy that,” McKenzie explained.

Asserting soil health as a drive to the agricultural sector, McKenzie said, “Without healthy soil we cannot have food security. We want sustainable soil, so we can have sustainable production. The food security that we’re aiming for, we will be able to achieve it.”