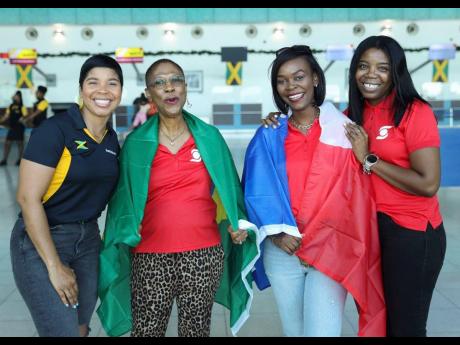 Contributed
Dr Erica Gordon-Veitch (second left) and Philippa Temple (second right) are the lucky Scotiabank customers off to the Qatar World Cup after winning the top prize in the Scotiabank & Visa ‘Fill Qatar with Passion’ promotion. Seeing them off at the Norman Manley International Airport on December 3 are Simone Hull (left), Scotiabank marketing manager, and Laurel Whyte, marketing officer.
1
2

Visiting Qatar for the football World Cup was not on Dr Erica Gordon-Veitch’s bucket list.

Though the paediatric and family dental surgeon is an ardent supporter of Brazil, she would have been more than content cheering them on from her home in Kingston.

But when she received news that she was one of two winners of Scotiabank and Visa’s ‘Fill Qatar with Passion’ promotion, she was ecstatic.

Gordon-Veitch and the other winner, Philippa Temple, were presented with prize packages that included round-trip tickets to the Middle East host nation and luxury accommodation for five days at a five-star hotel. The combined value is more than J$13 million.

“It was a surreal moment. I was very very surprised and happy,” Gordon-Veitch told The Gleaner.

She said this was her first time winning anything of this nature – and the lifetime wait was worth it.

Since arriving in Qatar on Saturday, Gordon-Veitch said she has been treated like royalty.

“When we reached the airport in Miami, we had first-class treatment. We skipped the lines and then Qatar Air was fabulous. They fed us about three times, and then they had movies right along or games you want to play.

“When we got to Doha, they met us, and we’re in a five-star hotel, and the food is excellent and the service is top five-star,” she gushed.

On Monday, Gordon-Veitch and her husband, John Ellis, were among the spectators in the round-of-16 matchup between Brazil and South Korea. The South Americans cakewalked to a triumphant 4-1 victory.

“It was absolutely awesome!” Gordon-Veitch said of the experience. “The Brazilian fans were very interactive and playing the drums and whistles.”

Gordon-Veitch also expressed relief that the talismanic Neymar had recovered in time to start after missing two group-stage fixtures because of an ankle injury.

“We didn’t know if he was coming back. In Qatar, he’s the favourite on the Brazil team, so they have him all over: in ads, he’s on their billboards, T-shirts, he’s very popular here, so all the Qataris and the Arabs who are supporting Brazil are happy that he is back on,” she said.

In-between games, she has also been exploring the state via metro, which is free for the duration of the World Cup. So far, she’s visited the Souq Waqif market and is enthralled by the myriad of carpets and perfumes available. Gordon-Veitch is also looking forward to sandboarding in the desert soon.

It is an experience that Perrin Gayle, Scotiabank Jamaica’s executive vice-president of retail and small business banking, said the organisation is delighted to give its customers.

“The Scotiabank family is happy to share in this exciting event and even more so that our lucky customers will be able to make the trip to Qatar. Have fun, and enjoy this once-in-a-lifetime experience,” Gayle said.

The promotion, which is a partnership between Scotiabank and Visa, ran from August 5 to September 30 and was open to any Jamaican over the age of 18 who either opened a new Scotiabank Visa credit card and made a purchase during the period, or existing cardholders who made a purchase of J$17,500 or more.

Meanwhile, Temple’s enthusiasm for her grand prize extended to her family.

“I’m excited about the win. All my friends and family are looking forward to it, just to experience it with me, not in a physical sense, but they’ll be there to enjoy through me the different things that I will experience in Qatar,” she said at a celebratory event hosted on November 19.