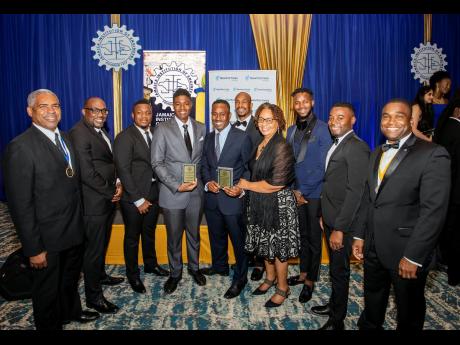 The three top-performing engineering students from the island’s tertiary institutions were recognised with the prestigious Jamaica Institution of Engineers and New Fortress Energy (JIE/NFE) Engineering Students of the Year award recently during the JIE’s annual dinner and gala held at The Jamaica Pegasus hotel.

Kevaughn Harrison, Daniel Meggo and Ruth-Anne McClymont were the 2022 recipients. The three graduates of the Caribbean Maritime University (CMU), University of the West Indies (UWI), Mona, and University of Technology, Jamaica (UTech), respectively, were selected because they have earned the highest grade point averages among engineering graduates in their respective faculties. In addition to receiving the coveted award, each student will have the opportunity to complete an internship with the prominent liquified natural gas (LNG) provider.

Since entering the Jamaican market in 2016, NFE remains focused on STEM education as the pathway to create the next generation of leaders and innovators.

Recognising the critical importance of the engineering discipline in intellectual development, technological advancement and the overall economic strength of an economy, NFE has to date, extended over 130 tertiary engineering scholarships to high-performing students at the three universities, and by year-end it would have awarded over $250m in tertiary engineering scholarships in Jamaica. It has also established the first cryogenics engineering course in the island in partnership with the UWI, Mona campus and in 2021, the LNG provider launched its summer engineering internship programme.

Kevaughn Harrison, the CMU graduate who studied mechatronics engineering would have participated in the internship programme at the company’s Combined Heat and Power Plant in Clarendon this summer. He was also an active member of the Jamaica Institution of Engineers Student Chapter within the university. With a passion to manage power systems within modern industrial facilities, Harrison aims to establish a career as an automated systems engineer and to explore and develop possible improvements to boost efficiency and production rates.

Harrison said that he was certain about following a path to study engineering by the second semester of grade nine at the Ardenne High School. Guided by the famous quote of human rights activist Malcolm X, who opined, ‘Education is the passport to the future, for tomorrow belongs to those who prepare for it today,’ Harrison believes in taking full advantage of educational opportunities, like the NFE scholarships and awards, and utilising them to propel him towards greatness in the engineering field.

Holding a personal goal of becoming inspirational to others, Meggo, who studied biomedical engineering at UWI Mona, set high standards in the classroom by accomplishing goals he set for himself. He is already pursuing a PhD after which he anticipates a career in academia to impact future generations beyond providing solutions to the world’s medical issues, by imparting knowledge to younger biomedical engineers. He was a member of the Jamaica Institution of Engineers UWI Mona Student Chapter, Biomedical Engineering Society UWI Mona Student Chapter, The Rehabilitation Outreach Initiative, and the Irvine Hall Honour Society. He also served as a youth leader at the Fresh Bread Ministries International.

Meggo’s passionate curiosity and drive to discover led him to get involved in research projects on campus where he received several accolades and recognitions.

“For as long as I can remember, I have always had the desire to gain a deeper understanding of the different phenomena and processes occurring in the world around me. When I was younger, this desire meant staying back to watch how plumbers and electricians made repairs around my house, and as I got older, doing personal projects such as creating a solar oven and attempting to create an electric generator from an old fan. Accolades and awards deserve to be celebrated, but for a moment. Where they truly become useful is when you use them as sources of motivation to keep pushing toward the eventual realisation of your God-given purpose,” the awardee affirmed.

With an unyielding determination to triumph despite tribulations, McClymont not only stands out as a female in the graduating class of those pursuing a bachelor’s degree in civil engineering, but because she has demonstrated an aptitude for academic success at UTech. She was also actively involved in student organisations in the position of public relations officer for the Institution of Structural Engineers UTech Student Chapter for two years, as well as a member of the Jamaica Institution of Engineers UTech Student Chapter throughout her enrolment.

She offered that a person’s mind is their only limit – that is beyond one’s gender. “Civil Engineering gives the perfect ‘outdoor-indoor’ balance that I seek. While the field may traditionally be male-dominated, many women have found their place among their male counterparts because they have not limited themselves. In doing so, they have added their unique strengths to the industry. We all have something to offer and that should be the ultimate focus,” McClymont said.

“My mother is my greatest inspiration. A significant challenge I faced upon starting university was burnout, but I emulated her drive, determination and work ethic over the years and this laid the foundation for the person I am today. My goal is to continue learning in my current position as a project engineer because for me, the learning has really just started. I also intend to pursue a master’s in water resources engineering,” she continued.

The JIE-NFE Engineering Students of the Year Awards is open to all final-year students studying an engineering discipline at the CMU, UWI Mona and St Augustine campuses, and UTech.