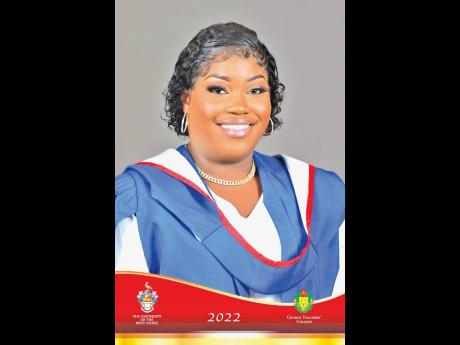 DESPITE A childhood burdened by poverty, community violence, and deaths of close relatives, 25-year-old Sarah-Lee Williams has emerged from those challenges a triumphant leader and educator, an achievement she credits to her relationship with God and to the tireless efforts and encouragement of her mother, Lesa Louden.

Williams shared her story with The Gleaner over the weekend, chronicling how she arose from a traumatic upbringing in the North Gully section of Montego Bay, St James, to eventually attain a bachelor’s degree in special education from the Church Teachers’ College in Mandeville, Manchester.

“It has been a rough journey, but I cannot complain because there are other people who have not met the criteria, who have not passed that milestone, and there were some who started out in our class batch but later died. I am here, I am in good health, I have overcome one hurdle, and it is a wonderful feeling,” said Williams, now a teacher at the Santa Cruz Learning Centre, which is adjacent to the Santa Cruz Primary School in St Elizabeth.

A past student of Barracks Road Primary School in St James and Rusea’s High School in Hanover, and a graduate of the St James-based Green Pond High School’s Sixth Form programme, Williams remembered clearly how she and her mother had to contend with being able to afford her necessary school supplies while dealing with the realities of poverty.

“One time, while I was at Barracks Road Primary, I needed a pair of shoes because the bottom of my shoe was falling off. I asked my dad for help to get one, but because of circumstances beyond his control, I never got the shoes, and mom was not able to buy it for me based on the budget she had. The last date when the shoes kept me, the bottom fell off in the town,” Williams recalled.

“It was my mother that was the main breadwinner at the time, and while I would have gotten help from other persons along the way, it was because of her determination why I made it. She never got an education, because her mother used to tell her ‘school nuh keep on Friday’, and she only got to go to school one or two days out of the week. So when I was growing up, she always instilled in me that it was important for me to get an education,” Williams added.

For Louden, who also shared her experience with The Gleaner, it took significant struggle and sacrifice to put her only child through school, from Rusea’s High School in Hanover to Green Pond High School in St James and then Church Teachers’ College.

“I suffered through struggling, loss of jobs, and sickness, and it was tough for me as a single mother. When my daughter was going to Rusea’s High School, I remember I could only give her $500, including $200 for fare and she could only buy a patty and a drink; and when I lost my job all we knew to eat was chicken back,” said Louden, who used to operate a shop on the same building as her home, and later helped in her sister’s tuck shop to support her daughter.

“But she never frowned, she never complained, and I sent her to school five days per week,” mom shared.

In addition to financial struggles, Williams and Louden had to contend with occasionally moving back and forth between their home in North Gully and a relative’s house whenever violence erupted in their neighbourhood. The experience was especially hard for Williams, more so when that violence claimed the life of her stepbrother.

“Most times when it was tense, or ‘hot’, in the area, my mother, my aunt and myself would have to leave to try to get some serenity. Persons quarrelling and shots firing can be quite frightening, so sometimes I had to relocate or go to the other family house, and one or two times I would go visit my dad. We had to make it work, the travelling back and forth,” Williams explained.

“We had deaths in my family, and one of my brothers died due to gun violence,” Williams said. “I had to experience death after death, and these were persons who were close to me.”

In spite of the turmoil, though, Williams managed to leave Rusea’s High School with eight CSEC subjects, and during her time in Green Pond High’s Sixth Form programme she developed her leadership skills through participation in various extracurricular activities.

These included her roles as the head girl, the Student Council vice-president, the president of the Cultural Expressions Club, leader of the Debate Society, and membership on the school choir, culminating in her becoming the school valedictorian.

Williams said that her church attendance played a major role in her being able to pull through the difficult times when she had to balance her schoolwork with the reality of her living situation.

“My mother got invited to church, and I would go to Sunday school, and that is where I got my leadership skills developed. I used to sing and be an active member of the choir, and even now I do teach Sunday school. My relationship with God has been cemented, and that is what has kept me,” said Williams.

Louden, meanwhile, is grateful that her daughter has achieved her academic accomplishments in spite of their hard past.