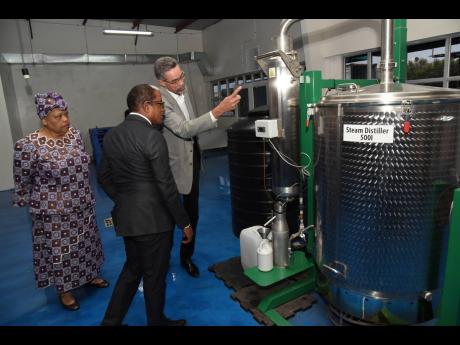 Ian Allen
David Harrison (right), director, Jamaica Business Development Corporation (JBDC), explains the use of the steam distiller in the essential oils incubator to Dr Norman Dunn, state minister in the Ministry of Industry, Investment and Commerce, and Valerie Veira, chief executive officer, JBDC. The occasion was the grand opening of the JBDC Incubator and Resource Centre in Kingston on December 2.

When the Jamaica Business Development Corporation (JBDC) executives brought the conception of an incubator for the development of an essential oils industry to technocrats at the Ministry of Finance the Public Service, they were immediately sold on the idea and signed off on it. Despite this strong backing, however, the going was rough, with Executive Director of the JBDC, Valerie Veira, describing the pace of process thereafter as painfully slow and next to impossible, during Friday’s opening of its Incubator and Resource Centre at 10A Marcus Garvey Drive in Kingston.

Approval and financial support for the Essential Oils Incubator Project was confirmed by the Government of Jamaica in March 2021, following a review of the Public Investment Management Secretariat and approval by the Cabinet. With this approval, the JBDC began the planning and implementation of the project, which was scheduled to span April 2021-May 2023, Agro-Industry Cluster Supervisor Treanna Lindo told the opening ceremony.

In fact, Viera admitted that the ease with which the finance ministry officials accepted the business idea and signed off on it caught her team off guard.

“There was absolutely no hesitation, The committee approved the concept and, in fact, approved the budget. So we actually got $15 million as seed money to set up the incubator and that, for us, was a major achievement because, usually, you go through a lot of hoops and loops to get budgets assigned. We didn’t have that problem. At that stage it went well.” However, things would get sticky down the line, she disclosed.

“After that it was like pushing hot molasses up a hill to get other things done. But my team, we got the molasses over the hill, and when you go through that kind of journey, the difficulties along the way, we always say they are learning experiences. When you reach the point like this morning, it is the joy, the excitement that you get from the manifestation of that kind of journey. So the molasses is over the hill and it is the sweetness now,” she declared. Viera did not share any specifics of the problems encountered.

Meanwhile, Minister of State in the Ministry of Industry, Investment and Commerce, Dr Norman Dunn, described the facility as a big deal.

“What is happening today is a big deal for small farmers, the housewives, all those persons with ideas. This morning’s event is another firm indication of the Government’s push to develop the value chain in agriculture and to strengthen our nontraditional industries. We haven’t been tapping into the natural resources in this country, as well as the ingrained creativity and entrepreneurial spirit, and the high-quality and uniquely Jamaican products and services that are in global demand.”

The 2,400-square-foot facility is equipped with:

• Laboratory that is equipped to do some of the standard tests required for oils being extracted.