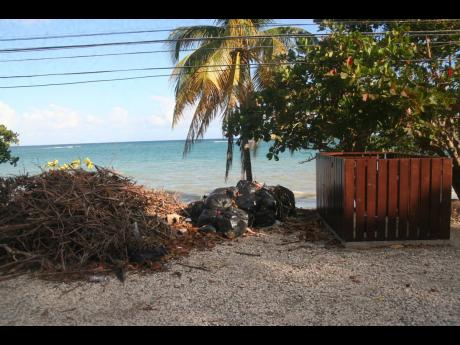 Photo by Bryan Miller
Garbage left behind from a clean-up project carried out on the Old Steamer Beach in Hopewell, Hanover, lay conspicuously beside a new dumpster built as part of the same project. The TEF is claiming that it is the World Bank that carried out the project, while the World Bank said it volunteered assistance to the TEF on the project. 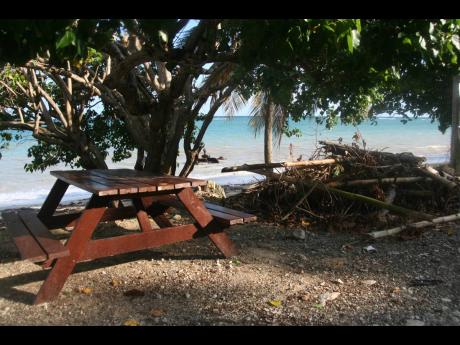 Photo by Bryan Miller
A pile of trimmed tree branches left beside a new wooden bench placed at the Old Steamer Beach in Hopewell, Hanover.
1
2

Residents of Hopewell, Hanover, have been left fuming after mounds of tree trimmings and uncollected garbage were left at the Old Steamer Beach after a clean-up exercise, with unanswered questions about exactly who was behind the initiative and why it was carried out.

The work, which was executed immediately after representatives from the Tourism Enhancement Fund (TEF) visited the area to announce plans to develop the beach, also included the erection of a wooden garbage receptacle and a wooden bench.

The beach has been left in an unsightly state, with the garbage harbouring rats and stray dogs.

“If whoever constructed those wooden garbage receptacle and bench had done even a cursory check with any member of the surrounding community, they would have been advised that though they look good, they will not last,” said one resident, noting that garbage receptacles placed at the location after a similar clean-up exercise by their community group were stolen shortly afterwards.

For this reason, they believe money spent in installing similar structures is being wasted.

At a TEF-hosted community consultation session with Hopewell residents and stakeholders to discuss the agency’s development plans for the beach, Director of Projects Johan Rampair stated that the National Solid Waste Management Authority had promised to clear the garbage after the work was complete.

“The World Bank is not currently supporting a project at the indicated location,” the institution said. “On October 27, World Bank staff voluntarily cleaned Old Steamer Beach, in coordination with the TEF and NEPA (National Environment and Planning Agency). This was a one-time activity.”

The World Bank directed further queries to Rampair, but several calls placed to his phone on Wednesday went unanswered, and he did not respond to messages left up to press time.

Lucea Mayor Sheridan Samuels, who also chairs the Hanover Municipal Corporation, had expressed surprise and annoyance at the TEF-hosted consultation that such an extensive clean-up programme had taken place at the Old Steamer Beach without any authorisation from, or notification sent to, the municipal corporation.

The Gleaner has learnt that Eastern Hanover Member of Parliament Dave Brown and Hopewell Division Councillor Devon Brown were also unaware of the exercise.