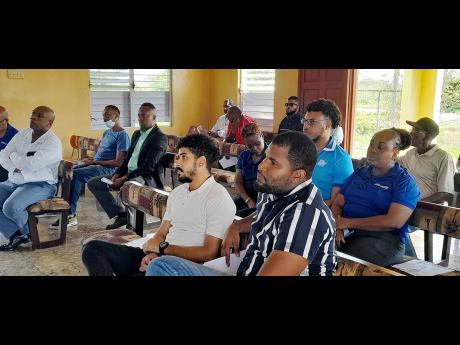 Ruddy Mathison
Hartlands residents attend a consultation session to discuss the establishment of agro farms in the community.

Residents of Hartlands in St Catherine are insisting that the community’s infrastructural needs must take priority even as agriculture ministry representatives look to set up two agro parks in the area.

At a community meeting held at the Hartlands Baptist Church on Tuesday, residents expressed their disappointment that the main road leading into Hartlands and the 40-year water crisis in the area were yet to be addressed despite several private investment initiatives.

“Over the years, the community has had issues where you have private sector, whether by themselves or in collaboration with government, have ease of access in setting up their projects and making available the resources that they need to benefit themselves only, and the community’s needs are ignored,” Astas Unis, a resident, told The Gleaner.

“For years we have been communicating with the agencies responsible for these infrastructures and we have not got any redress,” Unis continued.

She highlighted other challenges which the community faced due to neglect, including the absence of street lights, drains that are not maintained and inaccessibility to public transportation because of poor road conditions in the area.

At Tuesday’s meeting, Wayne Williams, project manager at the Agricultural Investment Corporation (AIC), an arm of the Ministry of Agriculture and Fisheries, gave an overview of the proposed projects.

He outlined that the Southern Plains Agricultural Development Project (SPADP) was slated to be implemented in the parishes of St Catherine and Clarendon. The project, which is being funded through a grant from the United Kingdom Caribbean Infrastructure Fund (UK-CIF), started in 2019 and is expected to be completed in 2024.

It will see 547.24 acres of agriculture lands in Amity Hall and 418.37 acres in Bridge Pen, St Catherine, divided up for the development of two agro parks for farmers to cultivate various crops.

But Annmarie Jenkins, president of the Hartlands community group, said the issue of upgrading the two basic amenities has never been addressed in any meeting with the group.

“We were not aware of any meeting held here in Hartlands so we could express our concerns, it was after we see heavy equipment rolling in that we demanded a meeting with the Agricultural Investment Corporation,” Jenkins said.

She said if they had been brought into the consultations earlier, the issue of the road and water crisis would be front and centre because of their importance to the community.

Kristal Clarke, social and gender specialist with AIC, said consultations were held in the adjoining communities of Amity Hall and Bridge Pen; however, she was unaware that there wasn’t a representative from Hartlands in attendance.

She assured the residents that at the next quarterly meeting, representatives from the National Water Commission and the municipal corporation would be invited to respond to their concerns.

Meanwhile, Williams disclosed that infrastructure work on the irrigation system that will benefit the farms has already started.

He said other than the all-important issue of food security, the project will seek to train farmers and producer groups in areas such as climate-smart technology, best agricultural practices, and best business practices. The AIC project manager noted that one of the terms for securing the grant was an insistence from the UK-CIF that women and youths be targeted for involvement in agriculture.

He says a key component of the project will be the spin-off of different projects in other communities.