Jamaicans directing crimes from overseas reported to US law enforcement 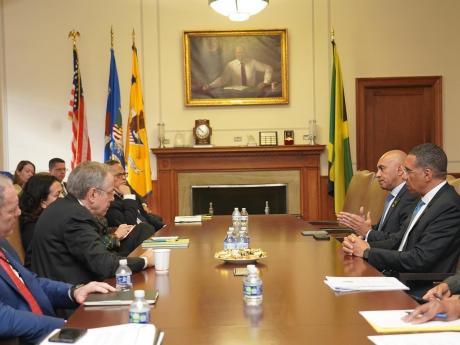 Thursday's high-level meeting of law enforcement and security agencies was convened to discuss the growing threat of transnational criminal gangs, organised criminal violence and the trafficking of illegal guns into Jamaica. - Contributed photo

Jamaican officials have shared with US law enforcement a number of Jamaican criminals living in the North American country who are allegedly directing, soliciting, or financing crime in Jamaica.

A media release from the Office of the Prime Minister (OPM) said during the meeting the commissioner noted that "closer cooperation will ensure that criminals do not feel they have a safe haven in the United States from which to sponsor crime in Jamaica."

Meanwhile, Holness said, “We were assured that the United States is taking even greater steps to deal with the problem of illegal export of firearms and we are pleased to note the passage of the Bipartisan Safer Communities Act which creates a legal framework to interdict and prosecute persons illegally exporting guns from the United States.”

The OPM release noted that the bill was passed in June this year.

Holness asked that Jamaican traffickers, and guns destined for Jamaica, be given priority attention under this new Act.

Thursday's high-level meeting of law enforcement and security agencies was convened to discuss the growing threat of transnational criminal gangs, organised criminal violence and the trafficking of illegal guns into Jamaica.

The OPM said the meeting reviewed existing programmes and partnerships, identified gaps to be closed and explored new opportunities to advance collaboration.

Opportunities for further expansion of institutional and human resource capacity-building and training were also explored, it added.