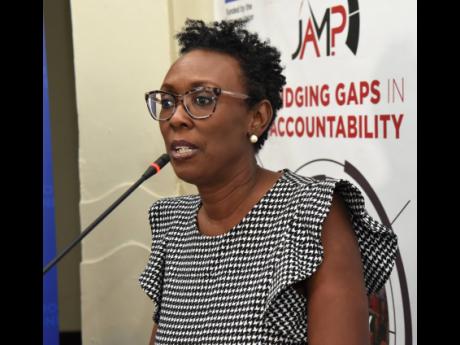 The Jamaica Accountability Meter Portal (JAMP) has added a national budget tool and a procurement tracker to its suite of online offerings aimed at promoting public engagement in holding elected government officials accountable.

The project was funded by the European Union with co-financing from the Inter-American Development Bank (IDB), UK AID, and the Open Society Foundations.

JAMP Executive Director Jeanette Calder said that Jamaica’s national Budget is the family budget, and though the finance ministry has always made it available, it is predominantly a technical document that was not put together with the average Jamaican in mind.

“Thanks to this minister of finance, we have been getting every year what we call a ‘citizens’ budget’, but that is still a very small summary of what the Budget is about,” Calder said at Thursday’s launch event themed ‘Mind Yuh Business Ja: Strengthening Citizens’ Role as a Partner in Governance and Accountability’.

JAMP’s website has an explanatory video on the four stages of Jamaica’s Budget cycle as well as charts and an interactive tool to allow citizens to examine how the Government gets and spends revenue.

The data cover the current and previous financial years, and Calder said that in time, trend data for five years will become available.

The executive director shared that the Government has a database available on a website, which details contracts for a 14-year period, but noted that the average citizen would not be able to manipulate it.

The procurement tracker gives access to a database of more than 179,000 public contracts awarded between April 2006 and September 2020, valued at more than $800 billion, and allows users to see trends and patterns of how public funds flow to private entities.

Calder also introduced the sectoral governance scorecard, the first in an annual series, which will highlight the achievements and underachievements in each sector.

JAMP examined all the sectoral presentations for the 2021-22 financial year and analysed the 108 commitments made.

According to the summary findings, 41 commitments were kept, 33 are in progress, and 34 were not kept.

“As the people who are funding this plan, out of 108, how do you feel about the fact that only 41 for that year was actually achieved, bearing in mind that funds are allocated? It’s not a case of the Government making a plan and they don’t have the $608 million to execute,” she said, adding that the detailed scorecard would be published in The Gleaner on Monday, December 12.

In his remarks, Private Sector Organization of Jamaica Past President Howard Mitchell argued that Jamaicans are diminished as citizens when they are ignorant of the truth and are denied access to facts.

Further, he said the society is dysfunctional when those who manage the assets of civil society, those who are elected to lead, and those hired to serve are not held accountable for the performance of their sworn duty.

“Freedom of information is a useful tool in the fight against corruption and incompetence, and it frees up more resources for all of us, so the social and economic reform which we badly need, and which is the next challenge to be tackled when we surmount our economic reform, is dependent on access to information and education and dialogue in order to build the trust on which a functional society is based,” he remarked.

She noted that at the heart of achieving a sustainable democratic society must be knowledgeable citizens with a firm appreciation of ethical behaviour and accountability as a means of advancing the development of our country Jamaica for current and future generations.

“This is only possible when citizens have access to reliable data on which to base their assessment of the performance of those charged with the stewardship of Jamaica’s resources. JAMP’s commitment to act in the public’s interest by creating the means for citizens to be empowered through the sharing of information is a critical and necessary step towards the achievement of Jamaica’s National Development Plan – Vision 2030,” Monroe Ellis said.