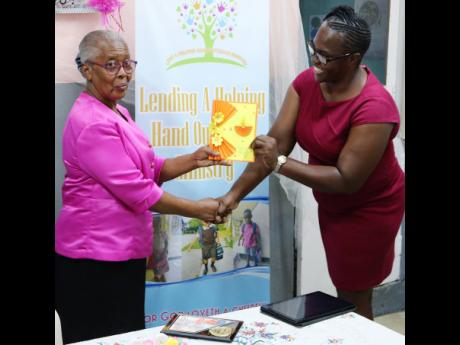 Christopher Serju
Caught off guard by a surprise tribute in her honour, outgoing principal of the Gospel Refuge Tabernacle Basic School accepts a token of appreciation from a representative of the Canada-based charity Lend a Helping Hand at the school, located in the Standpipe community in Kingston. Photos by Christopher Serju 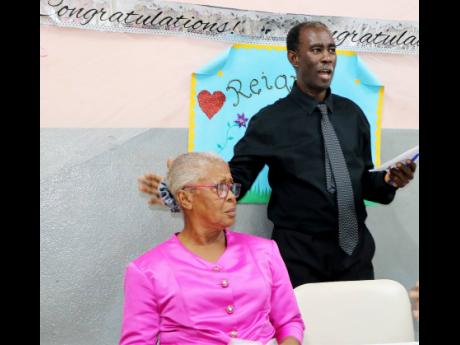 Christopher Serju
Althea Fuller’s face reflects the confusion as the chairman/moderator Anthony Simpson reveals that what was promoted as an evening to honour parents was actually a surprise tribute to her as outgoing principal of the Gospel Refuge Tabernacle Basic School after 29 years of service. 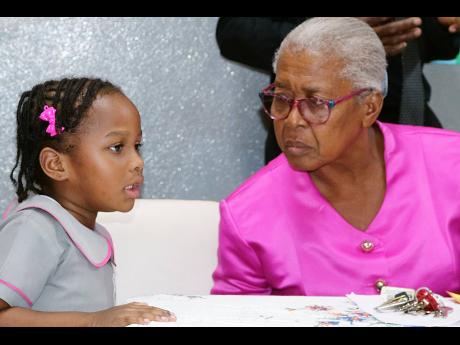 Christopher Serju
Unmoved by the occasion to honour principal of the Gospel Refuge Tabernacle Basic School, Althea Fuller (right), this youngster still sought answers from her, even as tributes were being paid to the educator.
1
2
3

Jamaicans have been charged to nurture good behaviour in their children, and seek to create a wholesome environment in their homes and communities as a counter to the growing indiscipline in the society.

Anthony Simpson, a senior member of the Gospel Refuge Tabernacle on Barbican Road in Kingston, used the occasion of a ceremony to recognise the work of Althea Fuller, principal of the church’s basic school, to admonish especially Christians for what he describes as their failure to positively deter wayward youth from a life of crime.

Fuller, who is also founder of the Gospel Refuge Tabernacle Basic School, was honoured for 29 years of service in a surprise tribute organised and funded by the Canada-based Lend a Helping Hand Outreach Ministry.

“Sister Fuller has influenced the lives of ... parents, children and families of those persons, pushing that Christ-like environment.

“If more of us had been doing that, our communities today would be much better than how they are. One time you could say, ‘I am going to the country (rural Jamaica), I am going to have a nice time, forget about [the] inner city and run to the country to relax and feel good. Now, on every corner of Jamaica, the guns are barking and people are dying, because there are not many persons out there now influencing their community,” the clergyman said.

“We take up our Bible and run through the church door to make sure that we are here on a particular day and that’s it, but there is no influence on the environment, no influence on the outside, no influence on the communities. We have got to touch the lives of those who are young right now, so that when they reach 14, 15, 16 years old and somebody push a gun in them hand and say, ‘Hold on pon this and lock it fi me’, them say, ‘No, you keep that’, and run from it,” Simpson told his audience as he moderated the evening’s programme.

PUSH BACK AGAINST EVIL

A justice of the peace who engages in outreach activities in Standpipe and neighbouring inner-city communities, Simpson acknowledged that the negative forces on the youth are hard to resist. However, he said, the Church and schools should push back against evil to ensure a peaceful Jamaica.

He shared an experience on the first night of curfews imposed because of the COVID-19 pandemic a few years ago.

According to Simpson, he was called to a police station, in his capacity as a JP, after a 16-year-old youth was reportedly held with a firearm. The boy’s mother, who was also called to the station, was asked to remove the youngster’s jewellery.

“He had a ring on his finger and she could not take that ring off because he refused to surrender it. She held his hand to take off the ring, and if so many police officers weren’t there, he would have killed her on the spot,” Simpson said.

“One police say, ‘Mama, why you make the bwoy handle you so? Why you nuh slap him?’

He said the response from the scared mother caught everyone by surprise. “Him tek shovel and bruk mi hand already,” she reportedly said.

And, when asked where the boy’s father was, she said, ‘The father can’t talk to him neither.”

Simpson urged the audience to give positive guidance to the youth.

“If we don’t wake up, it is going to get worse. Let’s influence our children, talk to them, make them know what is good and what they should seek after, because we are not going to allow this country to go down,” he charged them.